As with a good number of other French composers, some of these works were written as examination pieces for students at the Paris Conservatoire.

A representative example is Schmitt’s Suite en trois parties for Trumpet & Piano, Op. 133, a work he composed in 1955.

Schmitt’s score isn’t the only piece for trumpet prepared for students of the Conservatoire; other works composed during the first half of the 20th century include ones by Camille Saint-Saëns, Claude Debussy, Arthur Honegger, Philippe Gaubert, Olivier Messiaen, Guillaume Balay, André Chailleux, Jeanine Rueff and Theo Charlier. 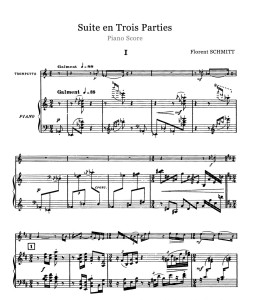 The Trumpet Suite is a late work:  It is #133 out of a total of 138 opus numbers in the Schmitt catalogue – written when the composer was in his mid-80s.

Its first hearing came in a 1956 radio broadcast performance by the then-young trumpet player Maurice André, followed by the premiere concert performance done by Roger Delmotte, esteemed member of the Paris Opera Orchestra.

The first public hearing of Florent Schmitt’s Suite for Trumpet was by Maurice André (1933-2012) in a 1956 radio broadcast performance.

To my ears, the music bears no indication at all of an aged or tired musician.  Instead, I hear three contrasting movements exuding a level of inspiration that rises well above that of a mere competition or demonstration piece.

To be sure, there are many challenging passages for the soloist, but they don’t seem to have been incorporated into the piece purely for the pyrotechnics.  And at no time does the music come across as “rhetorical.”

The musicologist Anne-Marie Gouiffès has noted that Schmitt’s Trumpet Suite is a “major work” in the repertoire, writing:

“The two musicians [trumpet and piano] rival one another in brilliance from the first movement on, although lightness and high-spiritedness hide the technical difficulties of the piece.”

As was his custom with many of his compositions, Florent Schmitt orchestrated the Suite, and so this music has had a life in the concert hall in addition to recital programs.

In fact, Schmitt’s Suite stands alongside several notable trumpet concertante works composed by other French composers during the same time period – among the most famous being the trumpet concertos of Henri Tomasi and André Jolivet.

The musicologist Adélaïde de Place has written that the three movements of the Suite reveal Florent Schmitt to be an “ardent colorist.”  She adds:

“The first and third parts of the suite [Gaiement and Vif] are gay, incisive and forceful, while the second part [Lent sans excès] is rather wildly lyrical, with the trumpet letting itself go over the evocative melody played by the strings and the limpid, mysterious sonorities of the harp.”

Only recording of the orchestral version: Eric Aubier and l’Orchestre de Bretagne.

I am aware of just one recording of the Trumpet Suite in its orchestral garb – a fine performance by Eric Aubier with the Orchestre de Bretagne conducted by François-Xavier Bilger.  It was released in 1998 on the Pierre Verany (Arion) label.  The recording has also been uploaded to YouTube here.

By contrast, in its original trumpet-and-piano form the Suite has had more exposure in the recital hall and in recordings.

To my knowledge, the first recording was made in 1989 by noted Swedish trumpeter Håkan Hardenberger with Roland Pöntinen at the piano (released on the Philips label).

That blockbuster recording, which also features György Ligeti’s Mysteries of the Macabre, remains my personal favorite of the numerous trumpet CDs Mr. Hardenberger has recorded.

Subsequently, Schmitt’s Trumpet Suite has been recorded by Pascal Vigneron (in 1991 on the Quantum label) and Hannes Läubin (in 2006 on the Audite label).

The latter recording has been uploaded to YouTube and can be accessed here. 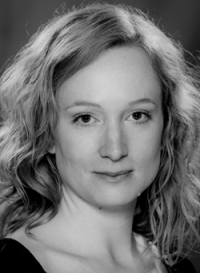 Also, there is a highly effective live recital performance of the Suite available on YouTube, featuring another Swedish trumpet player, Tora Thorslund.

Interestingly, when comparing the piano and orchestra versions of the Suite, it quickly becomes clear that Schmitt managed to conjure up the same dose of “color” in both.

To prove the point, you can listen to the orchestral version of the Suite and make your own comparison.  The three movements have been uploaded separately on YouTube here and here and here.

As British music critic Paul Griffiths has claimed, the second movement of the Suite, with its muted trumpet sounds, is positively “voluptuous” even in the piano version.

Griffiths is correct:  That movement – and indeed the entire Suite – has atmospherics to burn.

Following publication of this blog post, I was contacted by Rick Leder, a professional classical trumpet player who has been active for many years in the San Francisco Bay area and elsewhere, working with such ensembles as the Stockton Symphony, the New World Symphony, the West Bay Opera, the San Francisco Lyric Opera and the Des Moines Metro Opera.  He is also a trumpet instructor.

Mr. Leder and I were fellow students and orchestra members during our high school days in St. Paul, Minnesota (in the early 1970s).  I have always had great respect for his perspectives and opinions on the classical trumpet repertoire and performance practice.

Below are observations Mr. Leder shared with me about Florent Schmitt’s Suite for Trumpet and the various performances referenced above in this blog post.

On Tora Thorslund’s live performance of Schmitt’s Suite on YouTube:

The Schmitt Trumpet Suite is a lovely piece of music.  It’s very much in the French school — sometimes quirky and cute but with strong character, and always moody.  Tora Thorslund’s is an exceptional live performance, despite the rather inadequate sound quality.  I quite enjoy her approach to the music.  She has a nuanced approach to the technical challenges.  To me, it seems to emphasize phrasing and overall mood. It works very well.

On the Hannes Läubin recording on Audite:

When I listened to this interpretation right after Thorslund’s, the sound was so beautiful, I was immediately relieved!  And the technique is superb, of course (with fewer mistakes than in a live performance, obviously).

The choice of mute in the second movement was a brilliant move, too:  selecting a cup-type of mute rather than a straight version.  The special tone of this mute really aids in achieving the diaphanous (voluptuous) character — one that it seems only the French care that much about.

A 1956 charcoal drawing of Florent Schmitt by the artist André Aaron Bilis, created the about the same time as the Trumpet Suite.

[There is perhaps an even better choice of mute to achieve this effect:  a carbon fiber mute.  Jens Lindemann allowed me to use his when I played the second movement of Jean Françaix’s Trumpet Sonatina for him in a master class.  But at $250 a pop, most trumpeters do not possess this type of mute!]

On the other hand, Läubin, for all of his virtues both technical and stylistic, often plays high on the pitch — as do other performers.  But with piano … really?

On whether Hannes Läubin’s choices represent a “strategy”:

Regarding Läubin’s approach, if it was a conscious decision he made that was subservient to a larger interpretive framework, somehow I missed it.

I have a sense that “elegance” was not very important to him in his overall approach to the Suite.  This trumpet score — so very “French” and with all of the detailed instructions contained in the parts (I followed the score while listening multiple times) — is easily viewed as sufficiently “interpreted” by the composer.

In a case such as this, the performer does not need to “do” any more than what is written to achieve what the composer intended.  Indeed, it is a very difficult piece, and one may be glad to play just what is asked!

On proper performance practice for French scores featuring the trumpet or other instruments:

My own personal view about the music of Francophile composers like Schmitt, Françaix, Tomasi, Enesco, Bozza and others is that performers MUST, in my opinion, make the phrases come alive — often “bending the truth” a little here and a little there — the better to convey  whatever it is they discern in the score.

Especially in the second movement of Schmitt’s Suite — but elsewhere in the score as well — I feel that “elegance,” punctuated by light humor and occasional cleverness, is an integral component of the essential design plan of the composer.

About Håkan Hardenberger’s interpretation of this music:

I have not had the opportunity to hear Hardenberger’s recording.  I guess now I’ll have to seek out that one!   It is wonderful to find that this music is becoming better known, performed and recorded with more frequency now.  Thank you for writing about it.

… And thank you, Rick Leder, for your keen observations and insights.  Let us know if you ever decide to perform the Suite for Trumpet in recital yourself!