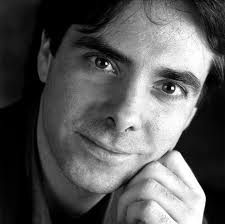 Not only has he become a champion of the music score, he has also created a special presentation incorporating Schmitt’s music, story line narration and imagery that helps introduce children to the world of classical music.

A winner of the Charles Oulmont Prize in 1988 and the Fondation Laurent-Vibert Award in 1991, M. Belthoise has gone on to build a noteworthy reputation for his rich and varied recitals and programs.

Recently, I asked Bruno Belthoise to share his views about the music of Florent Schmitt and what he finds most compelling about it, as well as his work with the Petit elfe score.  (His observations below are translated from French into English.)

PLN:  How did you discover the music of Florent Schmitt?

BB:  My first contact with Florent Schmitt’s music was in 1987 when I was a student at the Ecole Normale de Musique in Paris.  I had already started to give chamber music concerts with members of the Paris Opera Orchestra.  I recorded a CD of Bach’s music with Cybelia, a recording label that focused primarily on French composers.

At that time, Cybelia was releasing CDs of Schmitt’s orchestral works such as Antoine et Cléopâtre and Oriane et le Prince d’amour, as well as a CD of beautiful Schmitt piano pieces performed by Pascal Le Corre.

I must say, I was amazed by the richness of Schmitt’s writing, particularly for the orchestra, and Oriane in particular remains one of my favorite compositions.  I also studied and played some of Schmitt’s chamber works with my music colleagues, but public performances never took place.

I regret to report that the works of Florent Schmitt are not often performed by our national orchestras – which is also the case for Roussel, Pierné and other French composers of that period.

PLN:  How did you learn about Schmitt’s ‘Une semaine du petit elfe’Ferme-l’oeil’ suite for piano duet?

BB:  I especially like working on themes of children’s stories.  When seeking out new works, I discovered this suite that I did not know before.  It was composed at the same time as Ravel’s Ma Mère l’Oye, and I liked the Hans Christian Andersen story line.

This music offers a rich variety of timbres and has a very special elegance.  To play this work gives me intense pleasure!

One very interesting aspect of the music is that the primo piano part is composed on a fixed position of five notes.  The position varies from one movement to another, but is always in a series of five fixed notes.

By contrast, the secondo part is written with maximum virtuosity, suggesting an orchestral space woven into a highly sophisticated harmonic language.

With this ingenious device, Schmitt creates a sound that is highly natural.  But it also takes special preparation to overcome the “imbalance” inherent in the two parts.

The music is actually quite challenging for both players.  The primo part is not easy to achieve for young piano students because of the musical context and rhythm.  And the secondo part requires demanding technical abilities because of the complex intersections of the four hands that must be successfully navigated and resolved — without leaving anything to chance!

PLN:  When and where have you played Florent Schmitt’s score?

BB:  The first time I performed the suite was in 2006 at the Festival de Música de Alcobaça in Portugal, with pianist António Rosado.  After that, I played the work with the Brazilian pianist Christina Margotto for two years.

Most recently, I have performed the suite with Claude Maillols in Paris, and we will be performing the music again in September 2013 in a recital in Belgium.

There are plans to release my 2006 performance with António Rosada as part of a 2-CD set containing all of my live recitals for the Portuguese national radio network.

PLN:  What inspired you to create a new version of the ‘Ferme-l’oeil’ story?

BB:  I have been working on a project called Concertos Narrados, [Narrative Concerts] which aims to bring young audiences to classical music.  Carefully selected stories and texts are an essential vehicle for the success of this project.  The programs are prepared in different languages – French, English, Portuguese, Spanish and German.

Combining stories with the music allows children to construct their own ‘dream world.’  I am involved in a collaboration of writing, storytelling and musical interpretation to produce programs that encourage children to approach and explore the world of music.

I deconstructed the original Andersen Ferme-l’oeil fairy tale, rewriting it in order to draw out the most significant elements, in a modern idiom that gives suitable importance to the words, situations and colors.  The story is much longer than the original text.

PLN:  How does Florent Schmitt’s score fit within the presentation?

BB:  The music is actually the same, but the movements of the original suite are performed in a different order now.  I act as one of the pianists as well as the narrator for the French version.

PLN:  And how do you present the story …?

BB:  The music is the core of the show.  The story is a pretext to get children to be open to listening to the music.  In our first public presentation, we called on an illustrator to create drawings which were projected on a large screen behind the performers.  This is a technique I have also adopted for other programs in the Narrative Concerts series.

PLN:  Where have you performed ‘Le Petit elfe’ in this Narrative Concerts version?

BB:  The first presentation was given in March 2013 in Portugal, at the Conservatory of Porto.  This production also featured the pianist Christina Margotto.

We presented different versions of the program in Portuguese, French and English for high school, college and conservatory student audiences.  The English version of the story was translated by Jed Barahal, an American cellist and a professor of music at the Escola Superior de Música [ESMAE] in Porto.

In general, my concerts for young audiences are targeted to schools, festivals and other events where students are given the opportunity to enter the world of classical music.  In addition to Le petit elfe, these programs have included Poulenc’s Babar, Bizet’s Jeux d’enfants, Saint-Saens’ Carnaval des animaux, Hansel & Gretel (with new original music by Emmanuel Hieaux), and others.

I collaborate with a number of performers in these programs:  pianists Laurent Martin, Christina Margotto and Hélène Josse, as well as Sébastien Marq, a flautist from the Baroque ensemble Les Arts Florrissants.

PLN:  What other composers do you enjoy performing?

BB:  My great interests are oriented toward French music, Portuguese music of the 20th century, other contemporary music, and chamber music in general.

For my solo recitals I program Debussy, Poulenc and Messiaen along with works by contemporary composers such as Bernard de Vienne, Emmanual Hieaux, Sébastien Beranger and Sérgio Azevedo.

My chamber group – the Trio Pangea – performs the classic repertoire of Schumann, Beethoven and Fauré, but also Shostakovich and other modern composers.

I also perform concerts with Le Concert Impromptu, a woodwind quintet that performs many eclectic ‘arts-fusion’ programs.  Our next performance will be in Paris in December 2013.  Titled ‘BWK,’ it is a tribute to Bertolt Brecht, Kurt Weill and Paul Klee, and will also feature the soprano Ana Barros.

PLN:  Do you have plans to perform any other works by Florent Schmitt?

BB:  My next goal is to perform the quartet Hasards.

PLN:  Finally, can you share any thoughts about your philosophy of performing?

BB:  In my view, the life of an interpreter should be more than simply taking the ‘standard’ approach to recitals and performing.  We should be perpetually questioning, we should be open to new experiences, and we should strive to engage in our own creation and improvisation!

Bruno Belthoise is an interesting artist who is doing some very laudable work bringing young people to classical music, in addition to his solo piano recitals and chamber music performances.

Unfortunately, North American audiences have not had many opportunities to see him perform; his appearances in this hemisphere have been limited to French Canada mainly.  Still, one can get a flavor of this musician’s very interesting and active schedule by visiting his website here.