From the very moment Timpani’s world premiere recording of two orchestral works by Florent Schmitt appeared earlier this year, it was clear that this was no ordinary release.

The recording features the ballet Le Petit elfe Ferme-l’oeil, composed in 1923 and presented at the Opéra-Comique in Paris.  It’s coupled with the Introït, récit et congé, a piece composed in 1948 for the cellist André Navarra and premiered in 1951 by Navarra and conductor Paul Paray.

The world premiere recording features Jacques Mercier conducting the Lorraine National Orchestra.  They are joined by Henri Demarquette performing in the cello work.

And the accolades have been coming in fast.  The recording has won several awards, capped by receiving the prestigious Diapason d’Or award in November.  The Schmitt recording was described by the judges as “a phantasmagoria of dreams, driven by an exuberant orchestra reborn under the baton of Jacques Mercier:  Pure delight!”

The Diapason d’Or award is particularly impressive due to the fact that just one other orchestral recording was included among this year’s prize-winners.  What’s more, the Schmitt recording was named “Best in Show” from among all of the 20+ award-winning recordings of 2014. 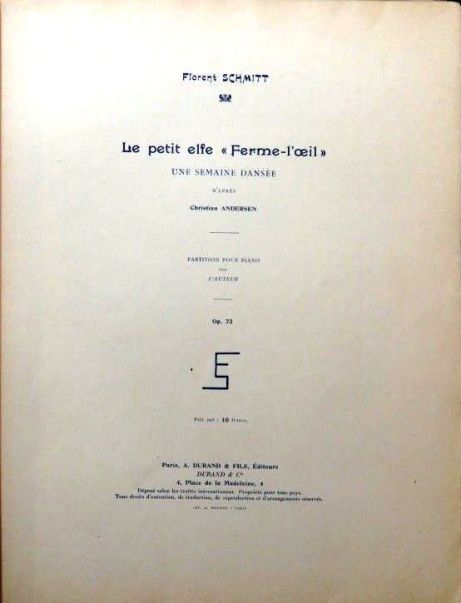 The Timpani release of Florent Schmitt’s Le petit elfe Ferme-l’oeil was the world premiere recording of this ballet, which was first mounted at the Opéra-Comique in Paris in 1924.

Beyond the awards, the critical accolades for the Schmitt recording have been well-nigh universal.  It has received highly positive reviews in the world’s leading classical music publications such as the American Record Guide, BBC Music Magazine, Classica, Diapason, Fanfare, Gramophone, and MusicWeb International.

Here is a sampling of what several of the critics have written about the music and the recording:

“Here’s just the album for the person who ‘has everything’ and who loves the great symphonic ballets written by Ravel, Dukas and Stravinsky …

The superb Lorraine Orchestra is in full rapture as Mercier captures the long arching form of each section, infusing them with buoyant dancing rhythms and lyricism.  Textures are clear yet opulent, from treble winds and warm French horns to shimmering and bell-like percussion and a rich bass drum.  Above all, whether in quiet or vigorous passages, the pacing always has life.  Orchestral solos are peerless, as is the engineering …

The harmonies and texture of the Introït, récit et congé are very reminiscent of Ravel’s Daphnis et Chloë … Demarquette plays a rich, expressive cello, and Mercier integrates the work’s many tempo shifts into an integral structure … This will leave you wishing that Ravel had written for cello and orchestra, too.”

Paul A. Snook in Fanfare:

“Even though [Schmitt] made use of the harmonic and textural devices of his French contemporaries … delicacy and nuance were only a couple of his intermittent concerns as he meticulously constructed his enormous orchestral machines, full of tidal surges, anticipatory dread and continuously unresolved climaxes … Schmitt’s heart — even in his works for small ensembles — was always drawn to the spectacle and excess of a theatrical ambience as seen in his mastery of the “symphonic ballet” …

Production and performance values measure up to the high standards established time and again in recent years by France’s now-premier label, Timpani, which can be accurately regarded as the French equivalent of Chandos in all respects.  No Schmitt groupie can survive without this disk.”

“[In Le Petit elfe,] the score calls for a panoply of instruments including harps, contrabassoon, piano and a full range of percussion with bells, xylophone and celesta.  Jacques Mercier and the Orchestre National de Lorraine deliver a sterling performance of this orchestral fresco …

[The Introït] opens with a scintillating whirlwind of orchestral dazzle, ushering in a plangent theme on the cello which is very much rhapsodic in character.  Then the instrument plays a more angular section against a background of orchestral fireworks.  This is followed by a short elegiac and wistful section which precedes a coda, ending the piece with wit, verve and panache.  The cello has centre-stage throughout, and what better advocate for this delightful music than the French cellist Henri Demarquette who plays with such fervour, insight and technical command …

Hats off to Timpani; they’ve done it again.”

If the critical acclaim for this recording and the music contained on it has piqued your interest, you can listen to a download of the Introït here, courtesy of YouTube.  Of course, to experience the music in full-fidelity sound — and to listen to the ballet — you’ll need to purchase the CD or a high-resolution download.

Trust me, it will be well-worth the investment!

[In addition, Henri Demarquette was interviewed about Florent Schmitt’s music at the time of the awards ceremony, and his comments are insightful.  You can listen to them here.] 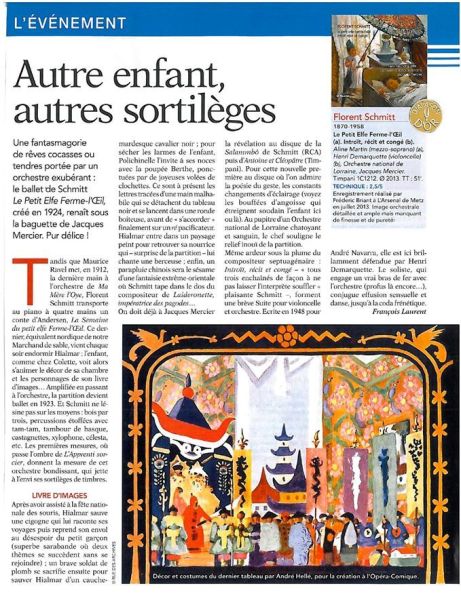