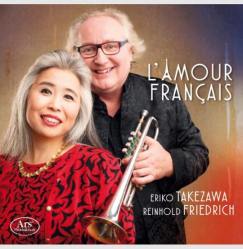 In March 2017, the German ARS Produktion label will release a new recording consisting of works for trumpet and piano created by ten Francophone composers, featuring the esteemed international soloist and pedagogue Reinhold Friedrich.

Titled L’Amour française, the recording is particularly noteworthy in that much of the repertoire is relatively unfamiliar – even to trumpet players.

The goal of Mr. Friedrich, who is joined by pianist Eriko Takezawa on the recording, was to give voice to unfairly neglected compositions, such as those by Maurice Le Boucher and Henri Martelli.  Also on the recording is an unpublished score by Charles Koechlin. 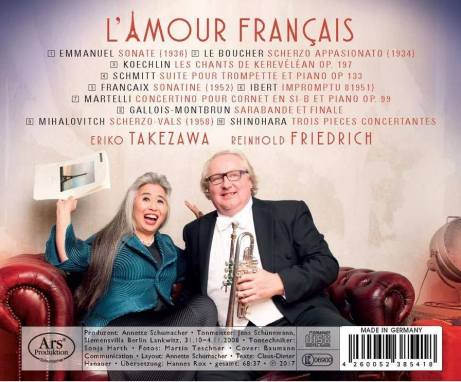 One of the marquee pieces featured on the new recording is Florent Schmitt’s Suite en trois parties, Op. 133, a late-career work the composer created in 1955 when he was in his mid-80s.

Simply put, it’s a terrific piece of music – and its freshness and inventiveness belie the fact that the composer was by then well into his ninth decade of life.

Moreover, the Suite is a composition that poses significant technical challenges for the soloist; the French conductor and trumpet player Fabien Gabel has remarked that the piece seems more like music written for the clarinet rather than the trumpet!  But for those who take up the challenge, the musical rewards are many.

Up until now, the Trumpet Suite has had four commercial recordings of which I’m aware.  The first recording appeared on the Philips label in the 1980s and featured the Swedish soloist Håkan Hardenberger.

One of the recordings – with trumpet soloist Eric Aubier – is of a version of the score featuring the composer’s own orchestration of the piano part. It is a winsome arrangement, reminding us that Schmitt’s powers of orchestration had lost none of their luster as he reached old age.

Thanks to ARS Produktion, we now have a fifth recording of the Trumpet Suite in the offing. Recently, I had the opportunity to ask Reinhold Friedrich to share his observations about Florent Schmitt’s composition.  His comments, presented below, are translated from German into English.

PLN: Your new ARS Produktion recording, L’Amour française, looks quite fascinating. It contains music that will be unfamiliar to many listeners.  What was the inspiration behind this new project?

RF: As musicians and audiences, sometimes we have a bit of a blind spot between the period of Mahler, Richard Strauss and Schönberg and today’s times of contemporary modernity.

But there is so much gorgeous music from other composers that is not so well-known, nor strongly perceived.  One of my objectives was to fill this gap.

I also consider it a wonderful opportunity – and an honor – that I, as a German artist, can help the French people rediscover some of their own beautiful works.

PLN: Your selection of repertoire is a mix of better-known composers along with some names which even experienced music-lovers might not recognize.  Was there a particular “strategy” to determine which composers and pieces appeared on the recording? 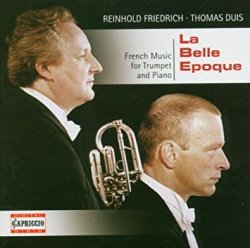 RF: We could have easily produced a double CD, there are so many great works by French composers from this era!

I had already made a recording of music covering the period 1890 to 1910, but there is a gap of some 25 to 30 years between the works on my La Belle epoque recording and this new L’Amour française one.

As a descendant of French Huguenots myself – and also as a person born on the 14th of July [Bastille Day], those are yet other significant connections.

PLN: Pertaining to Florent Schmitt’s Suite en trois parties which is one of the most prominent pieces on your new recording, that work comes from very late in the composer’s career when the Schmitt was already 85 years old. What do you find particularly interesting about this music – or possibly unique?

RF: Like Haydn’s Trumpet Concerto, the piece is a masterpiece from the pen of an aged and wise composer!  But at the same time, it brims with the inspiration and freshness of a much younger creator.

In the Suite, the trumpet is freed of all fundamentals in how it is treated.  And this music has it all:  virtuosity, humor, introspection, sadness, and fireworks.

PLN: When you encountered the Suite for the very first time, what was your reaction to it? 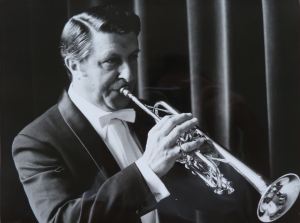 Roger Delmotte was the soloist at the premiere concert performance of Florent Schmitt’s Trumpet Suite in 1956, although Maurice André had presented it in a radio broadcast shortly before.

RF: I was deeply impressed by the piece.  And I also realized the great provenance of this music, which has been performed by the most important trumpet masters in France such as Roger Delmotte and Eugène Foveau – not to forget Raymond Sabarich and Ludovic Vaillant as well, who were the teachers of Maurice André and Pierre Thibaud.

PLN: How would you describe each of the three movements of this Suite?

RF: Each of the movements stands on its own, and the worlds they describe are different.  All three movements are demanding to play, but from different perspectives.

The first movement [gaîment] is fresh, funny, delicate and cheery. Think of a Basque chapeau, a baguette, and a glass of red wine!

The second movement [Lent sans excès] is passionate and deep, giving the trumpet the freedom to rhapsodize. Schmitt has such a good feel for exploiting all the qualities of the trumpet and the piano — and how they blend together.

And then the third movement [Vif] has this tremendous dynamism and a frenetic pace – along with the corresponding technical challenges that must be overcome.

PLN: Does Florent Schmitt write idiomatically for the trumpet?

RF: Indeed so.  Just as with Gustav Mahler and Richard Strauss, Schmitt takes advantage of every possibility of the instrument – while at the same time understanding its limits.

PLN: Is it true that the technical skills required to play this music are particularly challenging?

RF: The music requires a consummate musician – both technically and musically.  The trumpet range is almost three octaves, so the technical demands are certainly formidable.

At the same time, the proper blending of the trumpet with the piano is also important, and it requires much practice to get it just right – just like pairs in figure-skating.

PLN: Thinking about French composers active in the first half of the 20th century, how does Florent Schmitt fit in stylistically?

RF: I think that Schmitt took “tradition” as the basis for his writing, and then formed a bridge.

André Jolivet and Olivier Messiaen would be considered even more modern, but with such composers as Schmitt, Ravel and Debussy, we come to understand the course of that development and how musical style progressed from the traditional to the contemporary.

And Schmitt was part of that musical scene for decades.  Not all composers have been blessed with the kind of long life that Florent Schmitt had. Imagine how Mozart, Schubert, Mendelssohn and Mahler might have composed at 85 or 90 years of age! 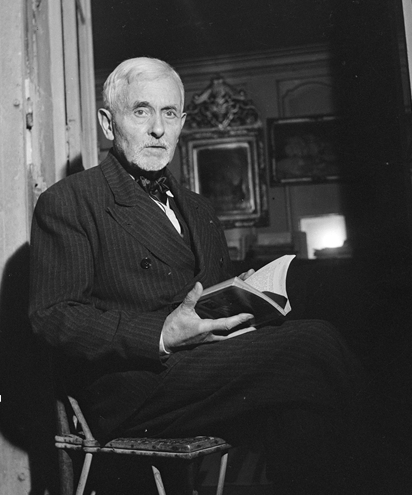 Florent Schmitt, photographed at his home in St-Cloud in 1953, two years before he composed his Suite en trois parties. (©Boris Lipnitzki/Roger-Viollet)

PLN: Before making this recording, was the Suite in your repertoire?

RF: Yes it was, but this new CD was an occasion to learn the piece again from scratch.  My first involvement with the music was a long time ago, towards the end of my studies.

Later on, in the search for some “big pieces” when I was head of the jury for the Philip Jones International Trumpet Competition in Guebwiller (Alsace) around 15 years ago, I succeeded in getting the Suite included in the first round of the competition program as a prescribed piece.

And it was a very good one for all of the wild young men and women who participated in that competition.

For me, competitions are where new skills and new knowledge should be exchanged – not just the latest musical works but also the less familiar ones – which help us close gaps in the repertoire.

Indeed, that was another rationale for my new recording.

PLN: The new ARS Produktion release identifies you and the pianist Eriko Takezawa as the “Duo Friedrich.”  When did you establish this musical partnership?

RF: Eriko and I have been working together for 22 years and have also been a couple in private life for four years.  Likewise, Florent Schmitt’s Suite has been with us for many years and we have presented it all over Europe, in Japan and in South America.

PLN: You have had an impressive 30-year career as a trumpet soloist, orchestral section leader, teacher and pedagogue.  What are some of your current artistic endeavors?

RF: In my orchestral activities, the Lucerne Festival Orchestra now has a new director in Maestro Riccardo Chailly, and currently there is an exciting process of artistic development among the old Abbado corps of musicians.

As a soloist, I am involved in performing baroque and other early music on period instruments, as well as presenting new works such as HK Gruber’s Aerial and Pietá in Memoriam Chet Baker by Christian Jost, who is a very innovative composer from Berlin.

Again and again I am asked to perform my “calling card” – Bach’s second Brandenburg Concerto, which was how I first fell in love with the trumpet as a 7-year-old.

I am gratified that many of my former students have made remarkable careers for themselves as trumpet soloists, professors and teachers, specializing in both old and new repertoire.

I am glad to see it all, but I’m always asking myself, “Are you still up to it?” That is, I press myself to continually keep striving and learning.

PLN: What major new projects are you working on at the moment — and are there any future plans to perform Schmitt’s Suite? 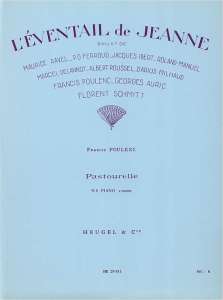 EF: My dream is to play Schmitt’s Suite with an orchestra – that would be a wonderful experience!

I am also hoping to obtain permission to arrange L’Eventail de Jeanne, a ballet composed by ten composers including Schmitt, Poulenc, Ravel, Delannoy, Ibert, Roussel, Roland-Manuel, Auric, Milhaud and Ferroud, for chamber ensemble (trumpet, alto saxophone, cello and piano), and to record it as well.  But there are still a few details to be ironed out first …

We are grateful that Mr. Friedrich continues to be so active in such varied musical endeavors. As for his dream to perform Schmitt’s Suite en trois parties with an orchestra, I can think of a few conductors who would be the perfect collaborators for such an endeavor.  Who’s game?