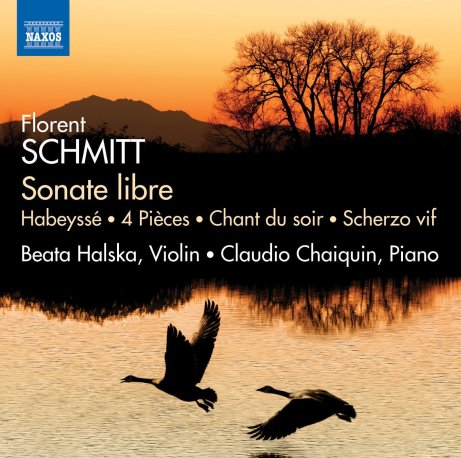 In mid-2015, NAXOS released a recording devoted to Florent Schmitt’s music for violin and piano.  It contains several world premieres, along with the Sonate libre en deux parties enchainées, Opus 68, a half hour-long stylistically advanced tour de force composed by Schmitt in 1919. 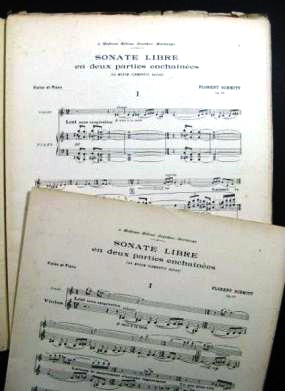 All told, the recording contains five works composed over a half-century period — the earliest being the Chant du soir, Opus 7 from 1895 and the latest the Habeyssée, Opus, 110 from 1947.

As can be expected, hearing the pieces chronologically helps demonstrate the composer’s stylistic evolution.  But even in the earliest works — such as in the “Barcarolle” movement from Quatre pièces, Opus 25 (1901) — Schmitt’s originality comes through with music stripped of all mannerism.

The NAXOS recording features the artistry of violinist Beata Halska and pianist Claudio Chaiquin.  The musicians hail from Poland and Argentina respectively, but more recently have made their musical careers in France.  Both have enjoyed successful solo careers, and they also perform together in recital.

This is Halska and Chaiquin’s first recording collaboration, and it has been warmly received by critics and music-lovers alike.  In his praiseworthy review of the recording in the Nov-Dec 2015 issue of Fanfare magazine, critic Robert Maxham commented on the importance of the music as well as the perceptive performances.  About the Sonate libre, Maxham noted a musical “style that occasionally recalls that of Debussy — now elusive, now ecstatic — but [which] projects his language far into the future.”

And in the early Chant du soir, a piece that was premiered in Paris in 1900 by the then-very young violinist George Enescu, Maxham states that the music “slithers in this reading with the seductiveness of Scheherazade.”

Recently, I had the opportunity to interview Beata Halska and Claudio Chaiquin about their new recording and how they put it together.  Their observations, presented below, are translated from French into English.

PLN:  How did you become familiar with the music of Florent Schmitt?

CC:  I have always loved French music — particularly the piano and chamber works of Debussy and Ravel as well as the songs of Fauré and Chabrier.  Little by little I came to discover other French composers as well — lesser-known ones like Reynaldo Hahn, André Caplet, Maurice Emmanuel, and of course Florent Schmitt.  The very first pieces I knew by Schmitt were part of the two-piano suite Reflets d’Allemagne. 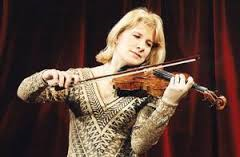 BH:  Actually, I did not know the chamber music of Florent Schmitt before I first proposed to record a live France Musique [Radio France] broadcast in its Festival Présences series in which the Sonate libre was performed.  But I already knew and enjoyed hearing some of Schmitt’s orchestral works, beginning with La Tragédie de Salomé.

PLN:  How did the idea of doing an album devoted to Schmitt’s music for violin and piano come about?

CC:  As Beata mentioned, she had already performed the Sonate libre with her mother, Barbara Halska — a well-known Polish pianist — for the radio program.  But she and I had also performed many times together, so when NAXOS expressed the desire for a recording of violin works by Florent Schmitt with the sonata as the centerpiece, it was a project the two of us took on.

Of course, I did not know any of this music before!

BH:  Actually, the project didn’t come about immediately after performing the Sonate libre on the radio.  At the time, I was devoting myself to preparing a recording of Polish music on the Dux label, including works of Andrzejowski, Zarzycki, Wielecki and Twardowski.  Next I recorded the beautiful violin concerto of Alexandre Tansman with the Symphony Orchestra of Radio Warsaw.

The positive critical reviews of these recording projects helped me realize that continuing to focus on the music of unjustly neglected composers was a worthwhile endeavor — which is how I came up with the Florent Schmitt project.  So with the Sonate libre in hand, Claudio and I worked to discover additional music, including a number of discographic world premieres. 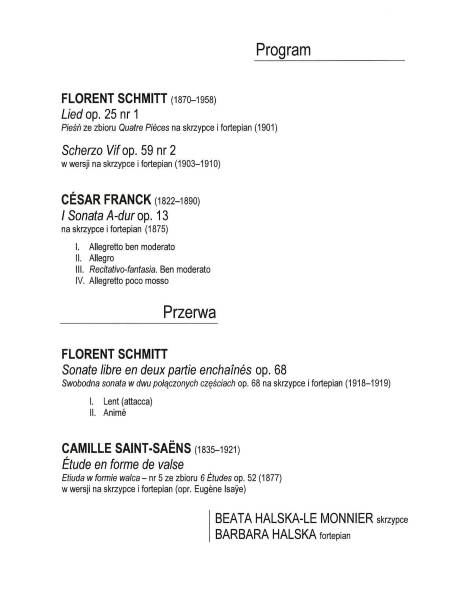 PLN:  As you say, there is a mix of world premiere recordings plus other works on the CD.  How did you go about selecting the music for the disk?

CC:  Beata and I tried to play all of the music that Schmitt had composed for violin and piano.  Some of the pieces sounded too easy, while others sounded better on the cello.  It was an interesting process of consideration; for example, we elected not to record the Légende [1918] which had been written originally for saxophone [and also for viola], opting instead to record the Quatre pièces which we found to be close to Caplet in style and also very expressive.

PLN:  Is there anything about the way Schmitt wrote for the piano and for the violin that you find particular unusual or noteworthy?

BH:  What strikes me most is Schmitt’s mixture of ardor and sensuality — it is dreamlike but also with passion and power.  It’s also noteworthy how he combines the violin and piano writing so that the two instruments project a “symphonic” sound that can be very grandiose — particularly in the Sonate libre.

I also love Schmitt’s at-times overflowing imagination and his ability to create quite unique sound and rhythmic combinations — some of them quite extraordinary!

Another interesting aspect is Schmitt’s penchant for “word games”; we see this in the Habeyssée, in which the title of the music is remindful of the letters “A-B-C.”

CC:  For me as a pianist, initially I thought I could approach this music as one would Debussy — with a light touch and a lot of pedal.  I was wrong!  Schmitt’s music is very different — even if one can discern some similar points.  Many times, Schmitt’s writing is sharp and energetic — and sometimes it’s enigmatic.  It is also very difficult to play — many notes, and not always “logical.”  But once you spend time with it, the meaning becomes so clear.

PLN:  What has been the critical reception of this recording?

CC:  We have received universally positive reviews of the recording.  For example, the CD received four stars in Classica Magazine.  We are very pleased!

PLN:  Have you had the opportunity to perform any of these pieces in recital? 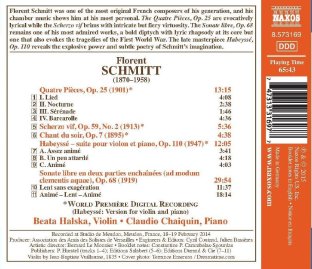 CC:  We have played all of the pieces in public.  The first time we performed the Sonate libre in recital (in Versailles), we were apprehensive.  Before we performed the music, Beata spoke to the audience and explained that the piece was quite long, difficult to play, and required intense listening.  When we finished our performance, we received a standing ovation.  The audience was very moved hearing this music — most of them probably for the first time in their lives.

BH:  Claudio is correct.  Unlike my radio performance of the Sonate libre which was clearly for “connoisseurs,” the audience at Versailles was made up of a more general music-loving public.  It was a joy to see that our performance before this kind of an audience was such a success.

As it turned out, the many great contrasts in the piece — the beauty of the melodic lines and even the “modernisms” that might have been problematic for some — turned out to be accessible to everyone and very well-received!

Since then, we have had no trepidations about presenting this music in public.  Indeed, members of the audience tell us how astonished they are that such great music by such a great composer is heard so rarely. 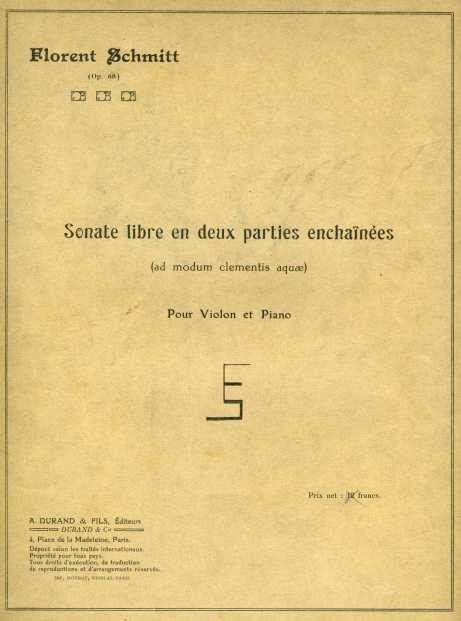 A vintage copy of the Sonate libre score by Florent Schmitt (1919).

PLN:  Do you have one or two favorites among the five pieces on the recording? 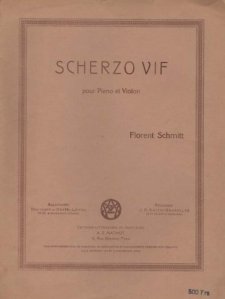 Florent Schmitt’s Scherzo vif, in an original printing by music publisher A. Z. Mathot (absorbed into the Salabert publishing house in 1930).

CC:  I must say that I especially like the Scherzo vif.  In spirit, it seems close to Richard Strauss’ Till Eulenspiegel.  But I also like Chant du soir, a piece with a very different character.

BH:  For me, each time I play one of these works, I say to myself, ‘This one is the most beautiful!’  But if forced to choose, I’d agree that the Scherzo vif is particularly wonderful, and it’s always appreciated by audiences.  I also dearly love the first movement of the Sonate libre.

PLN:  What other musical projects do the two of you have happening now, or planned for the future?

BH:  We have a series of recitals in France, and we are working on setting up some in other countries, too.  Unfortunately, we had to cancel our most recent concert because of the attacks in Paris, which was a very difficult situation for us all.

We also have separate musical projects.  Claudio performs duo-pianist works with another recitalist, and I am preparing solo appearances with the Les Solistes de Versailles, including music of Vivaldi and Piazzola, along with performing violin duo recitals with my husband, Bernard Le Monnier.

PLN:  Are there any final comments you’d like to make about Florent Schmitt and the NAXOS recording?

CC:  I think that Florent Schmitt’s music is slowly entering the repertoire.  And that trend is justified, because he is an important musician, setting aside World War II-era polemics and politics.  For our part, I loved preparing and recording these Schmitt works with such a great artist as Beata.

We are indebted to Beata Halska and Claudio Chaiquin for bringing this fine disk of Schmitt’s violin-and-piano music to the microphones, including several world premieres.  Through their investigative efforts and their perceptive interpretations, these artists are indeed helping to spread the word about some truly wonderful music — highly interesting and inventive scores that make the repertoire of music for violin and piano all the richer.

The recording is available in disk and download form from Amazon and other online vendors, as well as from NAXOS directly.  In addition, a video clip of Halska and Chaiquin performing in recital the first movement (“Lied”) from the Opus 25 suite of four pieces can be viewed here.

Other YouTube uploads taken from the NAXOS recording can be accessed here: