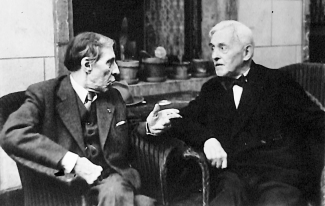 Throughout his lengthy creative career which spanned more than seven decades from the 1890s to the 1950s, the French composer Florent Schmitt would create vast swaths of piano music.

For a composer who possessed considerable pianistic talents of his own, it seems completely fitting that he would do so — and predictably, many of the pieces are quite challenging technically.

Indeed, the noted French pianist Alfred Cortot characterized Florent Schmitt’s piano music as “fistfuls of notes.” But what is also abundantly clear — and what Cortot explains in his chapter on Schmitt in his multi-volume books about French piano music — is that any such complexity in Schmitt’s output exists in service to the music, not as mere padding.

With few exceptions, I find Schmitt’s piano compositions to be endlessly fascinating. Even the “salon”-like examples of his piano creations are so much more than that.  There is beauty — but also real depth — in each of them.

During the early part of his career, it’s little surprise that Schmitt’s piano scores would fit pretty snugly within the late Romantic idiom — after all it was the time in which the young composer was living. Thus, in early piano sets like Soirs (1890-96), the stylistic influence of Schumann is unmistakable — as is the influence Schmitt’s own teacher and mentor, Gabriel Fauré.

But even in those early years — and roughly corresponding to Schmitt’s stay at the Villa Medici in Rome (the result of winning the Prix de Rome first prize for composition in 1900), we begin to discern Schmitt’s unique voice — and the forward-looking nature of his musicality — coming into focus.

In this regard, it’s useful to consider an episode involving Florent Schmitt’s interaction with his close friend Maurice Ravel, as both men explored ways of expressing themselves through their piano scores. As recounted by the Australian pianist Kenan Henderson:

“I’ve read about a story where one day [in 1901], Ravel announced to his circle of friends that it was impossible to write effectively for piano anymore.  Florent Schmitt then proceeded to write his remarkable Les Lucioles [“Fireflies,” the second of the two pieces that make up Nuit romaines, Op. 23] in reaction to Ravel’s contention. This subsequently provoked Ravel into writing his innovative and famous Jeux d‘eau.  It shows just how closely linked these two figures were in day-to-day life.”

It was about this same time that Florent Schmitt began composing a new set of six piano pieces which would ultimately be published in 1912 under the omnibus title Pièces romantiques, Op. 42.

Judging from the title, one might assume that this is yet another of the ubiquitous sets of salon-like pieces being produced in those times — works that cast glances back to the 1800s rather than looking forward to the new century. But Schmitt’s title is deceptive.  His work could easily be dubbed “Pièces modernes” and it would be just as legitimate a name because this is music that, while it certainly exudes romantic character, is also breaking free from those musical traditions.

Indeed, in this 20+ minute suite, Schmitt takes 19th century subject matter and casts it in a fresh new light. The composer goes several steps beyond his earlier piano suite Crépuscules (begun in 1898) as he takes the listener on a special aural adventure. At times, Pièces romantiques foreshadows Schmitt’s startlingly original piano suite Ombres which he would begin to compose only a few short years after completing the Pièces romantiques.

Certainly, the titles of the six selections that make up the set sound conventional enough:

But names can be deceiving; just listen to the beginning of “Lied tendre” which actually starts out Agitato — hardly the manifestation of any sort of “tender air.” And while things seem to settle down following the initial explosive agitation, the atmospherics are anything but “settled.” Instead, Schmitt takes us through meandering pathways that stretch tonality and give us the sense that the music is always just a little “off.”

That sensation is carried through to many of the other numbers in the set as well. The “Barcarolle” possesses a certain poignancy, but the music continually weaves in and out of its “expected” tonality. Those atmospherics are explored further in the “Valse nostalgique” with its halting theme and exaggerated Viennese lilt — even as the musical material morphs from one key to another (and one meter to another).

The “Improvisation” movement fairly flits from each musical idea to the next.  Schmitt’s improvisatory impulses are manifested in the “Nocturne” that follows, too. Suffice it to say that Schmitt’s isn’t really a nocturne in the spirit of Chopin, although the ending is as magical as any that Chopin created.

The final piece in the set — “Souvenir” — might suggest a quintessential salon setting for such music in the spirit of Frantisek Drdla’s contemporaneous work of the same name (1906). But here again, Schmitt has musical surprises in store: The piece has a robust theme which the composer takes through a range of permutations — highly rhapsodic in spirit.  Indeed, in this last number there are moments that sound as if they come straight out of Ombres. It is as if the composer is “closing the book” on his early pianistic style even as he introduces us to the complexity that his mature style would take on in subsequent years.

As was customary with many of his piano works, Florent Schmitt dedicated each of the numbers that make up Pièces romantiques to important people in his life. Two of the dedicatees were noted pianists of the day in France — René Vanzande (1873-1933) to whom the “Barcarolle” movement was dedicated, and Victor Henri Staub, who was both a pianist and a composer and to whom the “Improvisation” was dedicated. 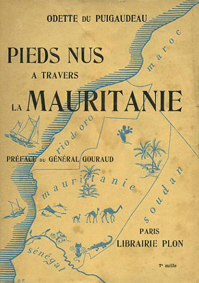 A shared interest in “orientalism”: The first-edition printing of Barefoot Through Mauritanie by Odette du Puigaudeau (1937).

One additional dedicatee is worth noting: Florent Schmitt dedicated the first piece in the set — “Lied tendre” — to Odette du Puigaudeau. She was a noted ethnologist and author who spent many years in North Africa (her most important book, Barefoot Through Mauritanie, was written there and was published in 1937).

A non-conformist in many ways, Mlle. du Puigaudeau was also the longtime lesbian partner of the painter Marion Sénones. Hers was the type of feminine character — dramatic and often scandalous — to whom Schmitt was so often drawn, not just as muses for his creativity but also in his real-life relationships and associations.

Composed over an eight-year period between 1900 and 1908, the score to Pièces romantiques was published in 1912; various sources indicate that the original publisher was S. Chapelier … then Philippo later on. It isn’t a well-known score, and to my knowledge the music has been recorded commercially just three times.

The first two recordings appeared nearly contemporaneously in the mid-1980s. The one featuring the pianist Pascal Le Corre was released on the relatively short-lived Cybelia label. It is a highly effective interpretation that captures neatly the “unsettled” undercurrents in the individual pieces in the set.

Le Corre was a student of the famed Italian-French pianist Aldo Ciccolini, and that special teacher-student connection may explain how the pianist was able to achieve just the right interpretive balance between the romantic and modernist impulses of this music.

Unfortunately, the Le Corre recording never had extensive availability and has been out of print for decades. Nevertheless, it is well-worth seeking out due to the pianist’s superb interpretation.

An equally winsome recording comes from the pianist Alain Raës, whose early-career rendition of Pièces romantiques was released in 1985 on the FY label. Here again, it’s unfortunate that such a fine recording is no longer readily available (at present, second-hand copies are commanding outsized prices on the Internet for those who seek to purchase a copy of the CD).

The 2006 recording of Florent Schmitt’s Pièces romantiques, made by pianist Angéline Pondepeyre.

Approximately 20 years would elapse between the first two commercial recordings and the release of the third and most recent one of this music. It features the artistry of Angéline Pondepeyre and was released in 2006 on the Talent label as part of an all-Schmitt recording featuring Pièces romantiques and three additional sets (the two books of Musiques intimes as well as the Trois valses-nocturnes). 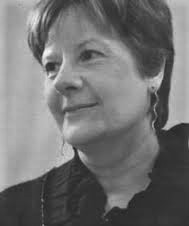 Pondepeyre’s approach to the Pièces romantiques is a more “relaxed” take on the score, with tempos generally slower, melodic lines more lovingly presented, and the “rough edges” of the music smoothed out. While it isn’t my preferred interpretation, it is an equally valid approach and may well be to the liking of other music-lovers.

Going beyond the three commercial recordings of Pièces romantiques, there is another way you can become acquainted with the music — and follow along with the score as well. Thanks to the marvels of modern technology, an “ersatz performance” of this music along with its score has been uploaded to YouTube.

The upload utilizes MIDI — a technical standard that connects musical instruments, computers and related audio devices for playing, editing and recording music — along with a Steinway Grand patch to create a “virtual performance.”  It is a note-perfect rendition of the challenging score, but the performance fails pretty definitively on the interpretive front. Even so, it is a useful opportunity to “see and hear” the music together with the score.

I think you’ll find that the creative genius of Schmitt’s Pièces romantiques shines through despite the lack of interpretive nuance in the YouTube upload. But it’s a stop-gap, and in order to experience the full effect of this endlessly fascinating score, seeking out the Le Corre or Raës interpretations in particular is recommended.  Their rich and vibrant interpretations will give you the full measure of the music.