In the century-long period from 1850 to 1950, the Prix de Rome prize for composition was probably the single most important and prestigious recognition for any French composer. And for that reason, nearly every important French composer strove to win it.

The Paris Conservatoire, pictured during Florent Schmitt’s time there as a student (Rue de Madrid entrance).

Offered to students at the Paris Conservatoire, winners of the award were rewarded with a handsome stipend, along with a multi-year stay at the Villa Medici in Rome in the company of fellow composers plus artists, sculptors and architects.

While in Rome, award recipients were free to follow their own artistic pursuits — the only requirement being to send back periodic envois to the Conservatoire, which for composers meant various works of music composed during their time in Rome.

Some composers were successful on their first or second attempt at winning the coveted prize, such as Claude Debussy in 1884. Others tried numerous times but were never successful, like Ernest Chausson and Maurice Ravel.

Like so many of his fellow composers, Florent Schmitt competed for the prize multiple times, beginning with the secular cantata Mélusine in 1896 and followed by Frédégonde in 1897 … Radegonde in 1898 … and Callirrhoé in 1899.

A photo showing the 11 candidates for the Paris Conservatoire’s Prix de Rome composition prize in 1900. Among the candidates are Jean Roger-Ducasse (far left, on railing), Maurice Ravel (in the center in bowler hat), Gabriel Dupont (standing next to Ravel on right), Florent Schmitt (reading the newspaper), and Aymé Kunc (sitting at far right on the steps). Florent Schmitt was judged the winner based on his cantata submission Sémiramis. (Photo taken at the Palais de Compiègne, May 1900.)

Finally, in 1900 Schmitt won the Prix de Rome first prize for composition in his fifth attempt with his secular cantata Sémiramis, Opus 14, scored for three solo voices and orchestra. 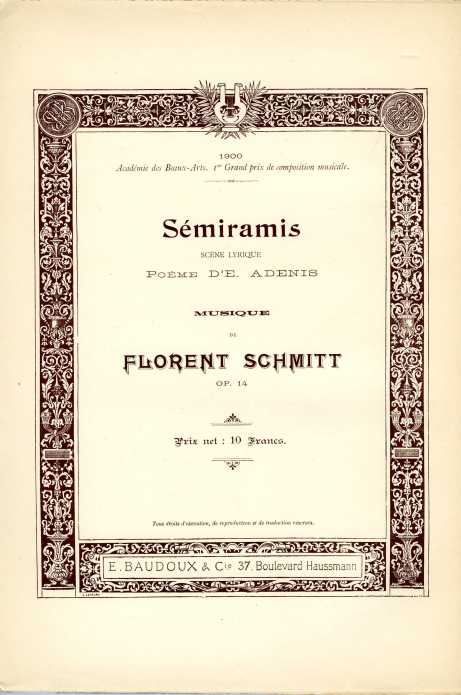 Sémiramis, the cantata that won Florent Schmitt the Prix de Rome in 1900.

In later years, Schmitt would explain that his success was due to the non-musicians on the selection committee. He wrote: 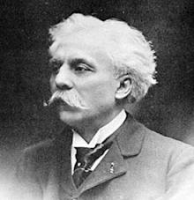 “I had to compete five times for the Prix de Rome to win it once. And if in the end I was not left out in the cold, it was thanks to Gabriel Fauré, my much-lamented teacher, who managed to gather for me enough votes among the sculptors and painters to counterbalance the animosity of the musicians who, with the exception of Massenet, Reyer and Saint-Saens, turned thumbs-down on me. But I have no shame for all that … the important thing was the 30,000 gold francs.”

A photo of Parisian musicians taken in 1900, the year Florent Schmitt won the Prix de Rome first prize in composition. Schmitt is pictured in the back row (second from left). Other composers in the photo include Gabriel Dupont and Jean Roger-Ducasse (back row) and Maurice Ravel (front row, second from right). (Photo Courtesy of Philippe Raynald Simon)

For Schmitt, his tenure in Rome was distinguished by the amount of time he wasn’t there — thereby turning the typical 24-month stay into a four-year travel adventure. Between 1900 and 1904, Schmitt journeyed to numerous European countries including Germany, Austria-Hungary and Scandinavia.

An early 1900s map of the lands of the Mediterranean. Florent Schmitt explored the region from end to end during his Prix de Rome period (1900 to 1904).

He also explored the Mediterranean region end-to-end, traveling to Sicily, Corsica, Spain, North Africa and the Near East. In doing so, Schmitt absorbed many different influences, which also contributed to his developing interest in orientalism.

In an article written in 1927 for the Christian Science Monitor, the French music critic Émile Vuillermoz described Florent Schmitt’s wanderlust — and the raised eyebrows it engendered:

“[Schmitt’s] regulation stay at the Villa Medici in Rome was marked by many heroic-comic incidents caused by his love of travel. This undisciplined pensioner traversed Europe in every direction with a whim and obstinacy that more than once won him severe remonstrances. This vagabond tendency led him to the most unforeseen places and allowed him to form his imagination and his heart at the same time as his talent.

Those 50 months outside France had a decisive influence on his outlook. One may consider as essential in the makeup of this exceptional person the ingredient of visual experience — of the reflection on things and costumes — to the same degree as that of musical training pure-and-simple. To develop himself, it was necessary for him to pick up what was lacking in the places immediately surrounding him.”

Florent Schmitt submitted envois to the Paris Conservatoire in each of his four years at the Villa Medici. In his first year, it was several movements to his Piano Quartet plus several chansons.  The second year brought forth the symphonic poem Combat des Raksasas de délivrance de Sita — a score thought to be lost in the Paris Flood of 1910 but recently rediscovered.

By far the most substantial piece of music resulting from Schmitt’s Prix de Rome years, the stunning Psalm, scored for soprano, mixed chorus, organ and large orchestra, would take Paris by storm in its 1906 premiere performance. It was a composition that had breathless critics speaking of Florent Schmitt as “the new Berlioz.”

A sonic “experience”: The piano-reduction score to Florent Schmitt’s Psaume XLVII, composed in 1904 at the Villa Medici in Rome.

There is no question that the magnificent splendor of the Psalm has overshadowed the other envois that Schmitt sent from Rome. One of these, Le Palais hanté (The Haunted Palace), is a symphonic etude inspired by an Edgar Allan Poe story — a composition that Schmitt worked on from 1900 to 1904.

This piece is actually fairly well-known, and has received four recordings beginning in 1983 (Georges Prêtre), with the latest one recorded earlier this year (JoAnn Falletta, slated for release in November on the NAXOS label). 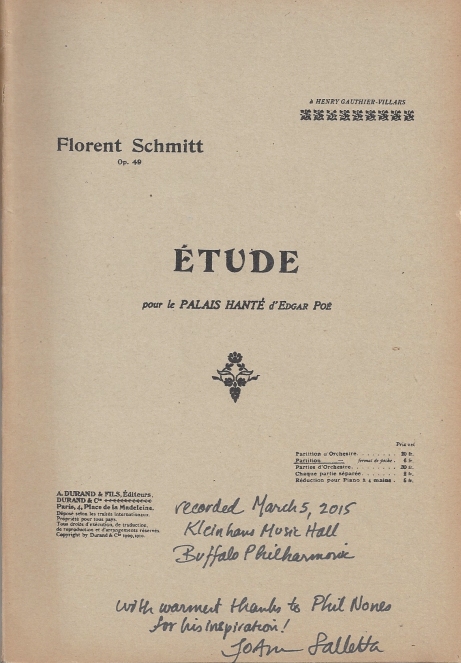 The score to Florent Schmitt’s Le Palais hanté, inscribed by conductor JoAnn Falletta who has made the latest commercial recording of this piece (2015).

All-but-unknown is another orchestral work, Musiques de plein air, Op. 44 (Outdoor Music). Schmitt had actually started work on this three-movement suite before he won the Prix de Rome. While at the Villa Medici, Schmitt completed the composition and submitted it as an envoi to the Conservatoire. The score is marked “Rome — 1900” although the music wouldn’t be published until 1916 (by Durand).

Schmitt dedicated the suite to T. J. Guéritte, an important Parisian impresario who was responsible for organizing concerts of French music in England and who brought Claude Debussy to London to conduct his own music.

Musiques de plein air is in three movements, as follows: 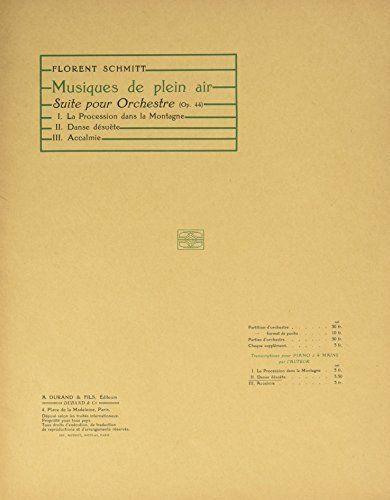 A vintage copy of the score to Florent Schmitt’s Musiques de plein air, one of the envois submitted by the composer during his Prix de Rome period (1900-1904).

To my knowledge, this work has never been recorded commercially. Moreover, I have been unable to find any evidence of the music being performed anywhere within the past half-century.

However, we are fortunate in that the first movement of the suite — La Procession dans la montagne — was selected by Désiré-Emilie Inghelbrecht as one of five of Schmitt’s compositions the conductor led at a French National Radio Orchestra concert in memory of the composer. The concert occurred on October 9, 1958, approximately two months following the composer’s death.

The broadcast tape from this concert has now been made available in its entirety for the first time in nearly 60 years. You can listen to the ORTF performance of the first movement of the suite here. (A special “thank you” to Eric Butruille, a faithful reader of the Florent Schmitt blog, for preparing the high-res audio file.)

While the music clearly sounds like early Schmitt, it exhibits many of the “trademarks” that would come to characterize the composer’s clearly recognizable style — from the opening English horn solo to the chromatic orchestral writing and the passionate tutti climaxes. At the quiet conclusion of the movement, the mood is both mystical and magical.

To my ears, this music makes one wish for the entire suite to be recorded. Here’s hoping that one of Florent Schmitt’s strongest advocates — Leon Botstein, Lionel Bringuier, Paul Daniel, Stéphane Denève, JoAnn Falletta, Fabien Gabel, Sascha Goetzel, Jacques Mercier, Yan-Pascal Tortelier or some other conductor — will be inspired to investigate this score … and finally bring Musiques de plein air to the microphones. 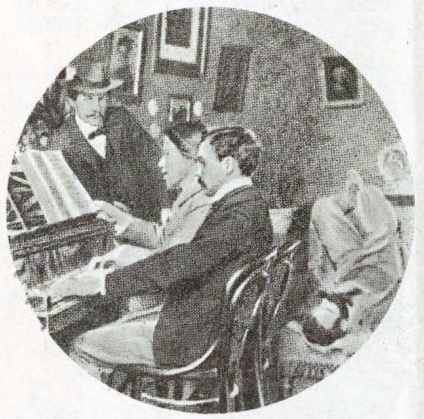 The camaraderie of the musicians, artists and architects who resided at the Villa Medici was palpable, resulting in many lifelong friendships. This rare photograph from Florent Schmitt’s days at the Villa Medici shows him playing piano duets with fellow composer André Caplet (1878-1925), to Schmitt’s right. Looking on is the sculptor René Grégoire (1871-1945) and lounging upside-down on the sofa is the painter Jean-Amadée Gibert (1869-1945).

Update (11/19/19):  A 1954 broadcast performance of Sémiramis, Schmitt’s prizewinning Prix de Rome cantata, has now been released by Forgotten Records.  Interestingly, the musical forces are led by Henri Tomasi, who was much better-known as a composer.  The sonics are quite good considering the age of the live recording.

We are indebted to Forgotten Records for giving us the chance to hear this music until such time as a commercial recording can be made.  The CD can be purchased on the Forgotten Records website and shipped anywhere in the world.