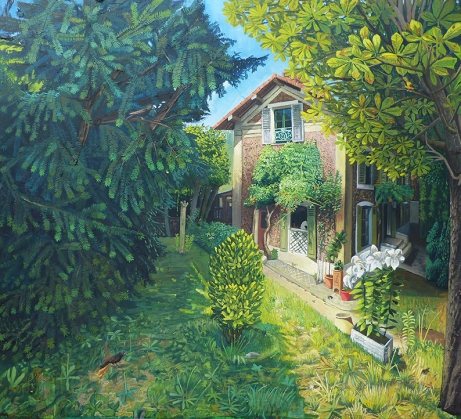 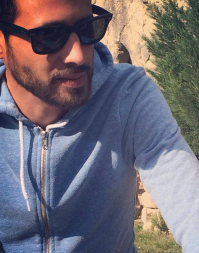 Not long ago, a document surfaced on the Internet that dates from the time of the Paris Exposition of 1937. As Europe’s last great transnational gathering before World War II swept the continent, countries great and small exhibited their art and culture at the International Exposition of Art and Technology in Modern Life (as it was officially named) — along with a proffering a heavy dose of militarism and political ideology in some cases — on the banks of the Seine River.

Among the most memorable events held during the Paris Exposition were the Fêtes de la lumières — symphonies of sound, lights and water for which 18 Parisian composers had been commissioned to create original works of music.  These were broadcast along with accompanying choreographic displays of water and lights in truly memorable spectacles designed to touch all the senses.

The historical document in question is a typewritten page that lists the 18 composers and the their creations, referenced below in order of their debuts at the Paris Exposition along with the total number of performances each piece received:

The most interesting aspect of the document is that the home addresses of all 18 composers are listed. All but two of the composers — Florent Schmitt and Marcel Delannoy — were residents of Paris at the time, and thanks to Google Maps it is possible to see those addresses today via Google’s “street view” mode.

Hardly surprising to anyone who has visited the City of Lights, what we find is that the composers resided in apartments scattered among nine of the twenty arrondissements in the city of Paris.  Even today, all of the domiciles appear to be situated in decent or prosperous neighborhoods.

A French friend of mine, business finance expert and lifetime avocational pianist Gilles Poilvet, has commented to me that the domiciles of these composers are well in keeping with what Paris was then, and remains today:

“Since the 19th century, in-town residential Paris is made up of 99% apartments due to a transformation of the city as ordered by Emperor Napoleon III during the 1860s, when half of the city was totally rebuilt with large avenues and large buildings. I lived in Paris from 1990 to 1997 but left when I got married, because living in Paris with young children is a quite a nightmare!

Where we live now, in Le Havre, is just a two-hour drive from Paris. It isn’t difficult for us to spend time in Paris with my family — visiting the city as ‘tourists’ which is the most enjoyable way to experience Paris.”

Whereas all of the composers’ addresses in Paris are apartment buildings, Florent Schmitt’s situation was different. Rather than residing in the city, from 1910 onward Schmitt made his home in Saint-Cloud, a close-in suburb across the Seine River and situated about ten kilometers (six miles) from the center of Paris. 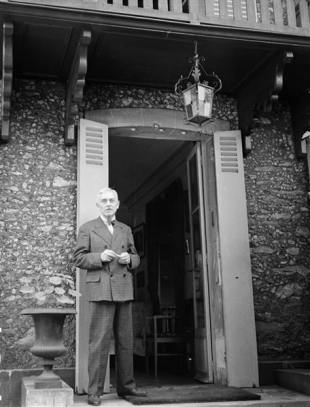 Florent Schmitt standing on the front steps of his St-Cloud home in 1937, the year of the Paris Exposition. (Photo: Boris Lipnitzki/Roger-Viollet)

Perhaps the reason Schmitt chose to live in St-Cloud was because neither he nor his wife originated as “city folk”:  He was born in the small town of Blâmont in Lorraine; she was a Pyrénéenne from the extreme south of the country.

The Schmitt family lived in two places in St-Cloud during the ‘teens before ultimately settling at a large estate on the Rue du Calvaire in 1920, where Schmitt would live for the next 35 years until nearly the end of his long life (1958).

Double humide 4, painted by Mathieu Cherket in 2016. Notice the urns — the same ones from nearly 80 years ago.

On Google Maps’ street view, the differences between Schmitt and the other composers appear striking; whereas all of the other domiciles are shown as attractive 4- and 5-story walkup flats, Schmitt’s address comes up as a stone wall.

At first I was somewhat mystified, wondering what might have become of the Schmitt residence. Gilles Poilvet’s description of St-Cloud today wasn’t particularly encouraging, either:

“Saint-Cloud has changed a lot since 1937, and it’s very likely that most of the big houses of that time have been replaced by apartments and other large buildings. Schmitt would be surprised (and disappointed) by the incredible amount of traffic there.  The changes in the town are explained by the upward pressure on residential prices in Paris and its suburbs.  But there are still some large homes in St-Cloud owned by rich families.”

A study for Balcon pointu, Mathieu Cherkit’s painting of the second floor balcony of Maison Schmitt/Cherkit (2016).

Further intrigued, I switched to Google Maps’ satellite view, which revealed that while there are indeed several large apartment buildings across the road and down the street from the Rue du Calvaire address, the side of the road where Schmitt lived still shows what appear to be older residential structures.

Perhaps the existence of railroad tracks immediately behind these properties — likely predating the development of the suburb — has made this particular narrow strip of land inhospitable to the construction of large, multi-story apartment complexes like the ones that are found nearby.

Confirmation of what Gilles Poilvet states: A view from an apartment building at 4 Allée Florent Schmitt in St-Cloud, looking eastwards across the Seine River towards center-city Paris and the Eiffel Tower.

Even more curiously, the spot denoting Schmitt’s address is completely obstructed by a forest of trees; as far as Google Maps’ satellite view is concerned, it’s as if there is no house there at all.

Entre deux, Mathieu Cherkit’s paintings of one of the entrances to Maison Schmitt/Cherkit in St-Cloud (2013).

But as it turns out, Florent Schmitt’s home still stands. Not only that, it remains in the hands of the very same family that took possession of the property following Schmitt’s departure in the mid-1950s.

Indeed, since that time, four generations of the same family have resided at this property. Today’s current resident of Schmitt’s home is a fellow-artist — but one of a different kind.  He is the young French painter Mathieu Cherkit. 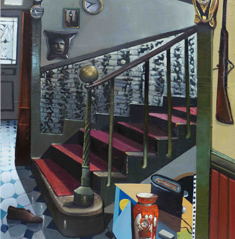 In fact, Cherkit has lived at the property on Rue du Calvaire nearly his entire life.  Born in 1982, Cherkit spent his childhood in the home of his grandparents and continues to live there today with his own family, prolonging the duration of just two families — the Schmitts and Cherkits — owning this property to a full 100 years.

Not only that, it turns out that the house has become the inspiration for many of Mathieu Cherkit’s artistic creations.  The artist informs me that he has created no fewer than 180 paintings that revolve around the house and its surrounding grounds.  In a sense, the home and its “personality” act as a kind of muse to the artist.

Educated as a painter in Paris, Nantes and Leipzig, Cherkit’s artistry started becoming noticed in the art world beginning around 2010.  Since that time his work has been exhibited in Paris and other French cities as well as outside the country.

In addition to being included in the collections of the National Fund of Contemporary Art, Cherkit’s artistic creations are carried by numerous galleries such as Tajan Art Studio (Paris), Jean Brolly (Paris), Henri Chartier (Lyon), Albada Jelgersma (Amsterdam) and the Lacoux Contemporary Art Centre.

Cherkit’s paintings are typically created as oils on canvas. They have been described as multilayered paintings that encompass bold pastels.  Emmanuelle Le Bail, director of the Musée des Avelines, characterizes Cherkit’s artistry as follows:

“Mathieu’s paintings explode, saturate our eyes, challenge us — disturb us perhaps — and surely question us about what it is to be a painter today. They succeed as tours de force of figurative painting.” 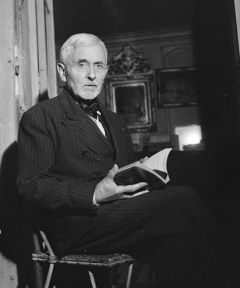 Florent Schmitt, photographed at home in 1953 seated at the side doorway entrance leading to his study. (Photo: Boris Lipnitzki/Roger Viollet)

As for the role Maison Schmitt/Cherkit plays in all of this, it has become the primary focus of Cherkit’s more recent creations:  an intimate look at his environment, translating his everyday life onto the canvas.

Nearly every nook and cranny of the house and grounds have become subjects of the artist’s paintings — now numbering some 180 creations.

Mathieu Cherkit paintings on display at the Musée des Avelines.

As French fellow artist Marc Desgrandschamps remarked upon the opening of an exhibition of Mathieu Cherkit’s paintings at the Tajan gallery in Paris in 2017: 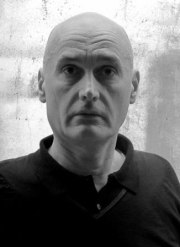 “[In this exhibition] the young artist reproduces the reality of his familiar places — his daily wonders.  It is a world of plenteousness — plenteous objects and vegetation in interiors and gardens where nothing happens … if attention to detail is the mark of precision, then it suffuses Mathieu Cherkit’s paintings in the abundance of details disseminated within his monumental compositions.

These details are clues to a narrative that wants reconstructing — an investigation that wants conducting.  Around nothingness something eventually springs — the traces or beginnings of a story …” 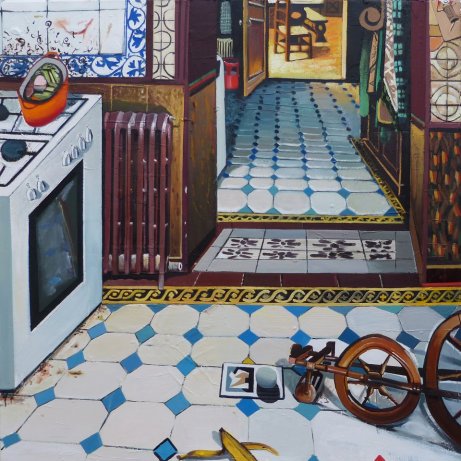 “Around nothingness something eventually springs — the traces or beginnings of a story …” Dirty Banana, Mathieu Cherkit’s painting of the kitchen and passageway area of Maison Schmitt/Cherkit (2012).

A number of years ago, Mathieu Cherkit was filmed working in and around the residence and grounds, where the viewer can see glimpses of how the property inspires … challenges … and in a sense protects the artist and preserves his inheritance.

One clearly notices the heritage — down to the very same urns that adorn the front steps of the home that were there back in Florent Schmitt’s own day. The dwelling itself seems untouched by time — the exterior, the architectural details, the parlors and kitchen/pantry spaces; some of the interior furnishings could well be holdovers from a century ago.

At the same time, this is very much the atelier of a contemporary artist in which the “tools of the trade” are clearly visible and in use in the several rooms and outbuildings that Cherkit uses as his studio spaces to create his paintings.

Mathieu Cherkit’s atelier on the top floor of Maison Schmitt/Cherkit.

Numerous everyday “found objects” find their way into Cherkit’s scenes, too, lending a sense of the ordinary to what is in many respects a very extraordinary place.

Open (2017). Mathieu Cherkit’s painting from the top floor of his home shows St-Cloud apartment buildings in the foreground. The Eiffel Tower is in the far distance, some 10 kilometers away.

In a way, the Cherkit property has become a vestige from an earlier age, as the march of time inexorably changes the character of the surrounding neighborhoods. St-Cloud today may be vastly different from before, but at Maison Schmitt/Cherkit the atmosphere is very much the same as it’s always been.

At its best, art is timeless. It speaks to viewers over the decades and has meaning to successive generations of people.  “Back in the day” Schmitt’s estate was a welcoming place for musicians, authors and artists who were treated to regular Sunday afternoon open house events hosted by the composer and his wife.

At the same time, it was also a place of refuge where Schmitt could retreat to create more than 70 significant musical compositions from 1920 onwards.

Today, it is Mathieu Cherkit’s place of refuge, inspiring as well as enabling him to create consequential paintings that command the attention of the art world. 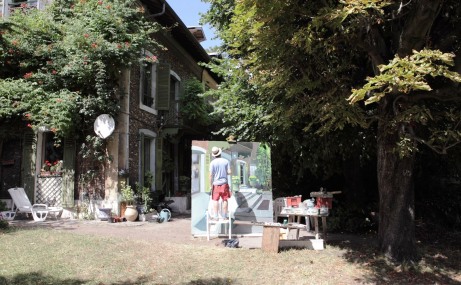 Indeed, this century-long spirit of artistry is imbued in the property, giving it a personality of its own. Long may it continue to inspire!

Two views: Florent Schmitt photographed in his study in the 1930s … and the living room at Maison Schmitt/Cherkit today. Notice some of the same furnishings 80+ years on. (Photos: Lipnitzki/Roger-Viollet – 1937; Mathieu Cherkit – 2019)

To view additional paintings by Mathieu Cherkit, you can explore the artist’s online gallery on Artnet.  There is also a brief radio interview from earlier this year that’s available on France-Culture in which the artist comes across as, in the words of author and musicologist Nicolas Southon, “a really cool, easy-going gentleman.”