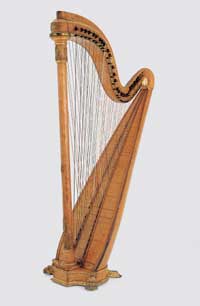 Chromatic harp (cross-strung harp), manufactured by the Pleyel company in the late 1800s and early 1900s.

In the early years of the 20th Century, several French composers would pen some highly interesting compositions that have given harp players some great repertoire items in the ensuing decades.

The composers in question were Claude Debussy, André Caplet, Maurice Ravel … and Florent Schmitt.  And the instigation was the arrival of the chromatic harp on the musical scene.

Invented in the late 19th Century to accommodate increasing chromaticism in orchestral music, the chromatic harp (also known as a cross-strung harp) differed from the pedal harp in that it removed the impediments posed by the conventional double-action pedal system then in use.

The chromatic harp featured two sets of strings — one tuned to C major and the other tuned to F-sharp pentatonic (similar to a piano), making it possible for the harpist to play any note from either side of the instrument.  The two sets of strings crossed near the midpoint of the strings, enabling the player’s hands to reach both sets of strings at the point of greatest resonance.

The chromatic harp was brought out by the Parisian firm of Pleyel Wolff et Cie. (later to become famous for resurrecting the harpsichord in a super-robust version championed by Wanda Landowska — a model that paid very little heed to historical precedents).

The Pleyel chromatic harp gained an early foothold in Belgium and France, where it was taught at the leading music conservatories in both countries.

To further its acceptance, beginning in 1903 the Pleyel company commissioned leading composers of the day to write music for the instrument.

Debussy, Ravel, Caplet and Schmitt were happy to oblige, along with a number of other composers such as Alfredo Casella, Reynaldo Hahn, Joseph Jongen, Paul Le Flem and Jean Roger-Ducasse (plus a goodly number of now-forgotten names).

Florent Schmitt’s Deux pièces pour harpe chromatique was one of many works commissioned from Parisian composers by Pleyel Wolff et Cie. to popularize its new instrument.

In addition to an extensive group of solo pieces composed for the chromatic harp, the key chamber/concertante pieces that resulted from the Pleyel commissions were these four:

The cover to a vintage copy of the score to Florent Schmitt’s Andante et scherzo.

Despite its star-studded introduction and the attention lavished upon it by the composers of the day, the chromatic harp would prove to be a bit of a short-term wonder.  Its popularity never stretched much beyond Belgium and France, and within a few short years new improvements in the design of pedal harps reestablished their preeminence as the “instrument of choice” for symphony orchestras.

Happily, music composed for chromatic harp can be rearranged for pedal harp without much difficulty, which is exactly what has been done with the four works above — either by the composers themselves or by others.

Of the four compositions — all of which were championed in their early days by the internationally renowned pedal harp player Lucile Adèle Wurmser-Delcourt — it’s safe to say that Schmitt’s work is the least known.  Both the Ravel and Debussy works have been established staples in the recital hall for decades now.  And little wonder, either, since both of them are fresh, highly engaging pieces that never grow old.

The only recording of Florent Schmitt’s Andante et Scherzo, with Sandrine Chatron and the Elias String Quartet, also features music by Debussy and Caplet (Ambroisie label).

Caplet’s Conte fantastique (which, incidentally, was inspired by Edgar Allen Poe’s Masque of the Red Death just as Poe’s writings also inspired compositions by Schmitt and Debussy) isn’t as famous as the Debussy and Ravel works.  But it isn’t unknown, either.  In fact, the piece also exists in a version for harp and full orchestra, which has given it an added level of awareness as conductors like Felix Slatkin and Georges Prêtre have seen fit to record it.

By comparison, Schmitt’s Andante et Scherzo is a real rarity — and to my knowledge, it has been recorded just once, on a rather elusive CD recorded in Paris in 2004 by the music label Ambroisie. 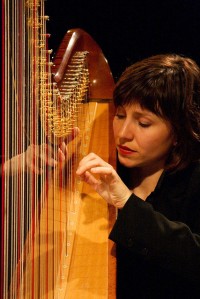 Fortunately for us, it is a fine quality recording, performed by interpreters who know the music well and have an obvious affinity for it — the French harpist Sandrine Chatron and the Manchester, UK-based Elias String Quartet.

These same musicians have also performed the piece in recital in various European countries — most recently a series of concerts in Italy in December 2013.  (One of those performances has been uploaded to the web and can be heard via this link.)

In comparing the four chamber/concertante works — which range from 10 to 17 minutes long — Schmitt’s 14-minute piece occupies a sort of middle ground between the pleasant, divertissement-like strains of the Debussy and Ravel compositions, and the contrasting “high drama” of the Caplet piece, related as that one is to Poe’s gripping storyline in The Masque of the Red Death.

The Schmitt piece is in a tertiary form.  The composer brings out the harp’s expressive qualities in two rather pensive outer slow sections that feature the instrument’s undulating arpeggios contrasted with the extended and accented phrases of the strings.

The central portion of the piece is a sparkling and dazzling Scherzo, displaying great rhythmic freedom even as the listener thrills to the stunning pyrotechnics of the harp, with the strings participating equally in the musical romp.  It’s fetching and addictively rich — and no mere trifle, either.

Eventually the Adagio music returns, quoting the same leitmotivs as before, and the work ends quietly.

It’s quite the little adventure — and emotionally very satisfying.

Although I have found no other recording of this music besides the Chatron/Elias performance on Ambroisie, the Andante et Scherzo isn’t completely unknown; the piece shows up in recital now and again.  In addition to Sandrine Chatron, another harpist who has championed this music in performance is Pauline Haas, playing it most recently in Strasbourg, France in concert with the Ensemble Volutes.

In October 2015, the Orchestre National de Lyon’s principal harpist Éléonore Euler-Cabantous joined fellow musicians of the ONL in presenting the Andante et Scherzo along with chamber works by Caplet and Henriette Renié at the orchestra’s concert hall there.

Moreover, the Doric String Quartet keeps the Andante et scherzo in its performing repertoire, joined often by harpist Agnès Clément in presenting the piece to audiences across the UK, Europe, and beyond. 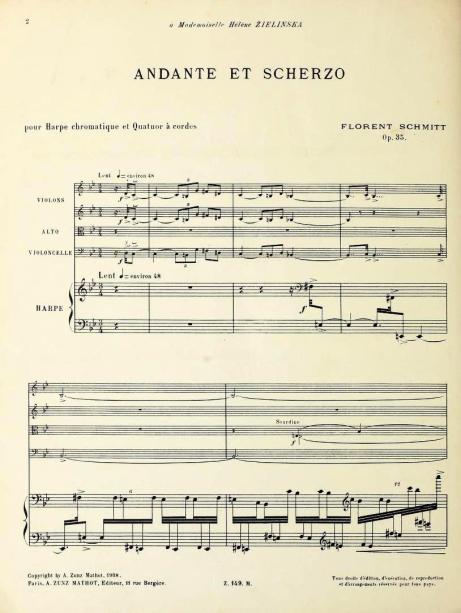 Here’s one more interesting bit of information:  It appears that Schmitt had another trick up his sleeve regarding this composition.  According to documents on file at the Pleyel company, Schmitt also prepared a version of the Andante et Scherzo for harp with full orchestra.

How interesting to ever have the chance to hear that version in performance; knowing Schmitt’s extraordinary capabilities in writing for the orchestra, we can only imagine how colorful and engaging it would be …

A 1909 advertisement by French publisher A. Z. Mathot appearing in Le Courrier musical, promoting compositions by Florent Schmitt including the Andante et scherzo.