Within the extensive catalogue of compositions by Florent Schmitt are a large number of choral works, great and small. Of these, music-lovers are likely to be most familiar with Schmitt’s grandiose setting of Psalm 47, which he composed in 1904 during his Prix de Rome period.

But most of Schmitt’s other choral works are vastly different from the Psalm. Of particular interest are five sets of pieces that he composed for female voices — all but one of which appeared comparatively late in the composer’s career:

The shortest of these — yet one of the most musically satisfying — is Trois trios, Opus 91 from 1940.  Fittingly, Schmitt turned to a “trio” of contemporary writers for inspiration in composing this set of pieces, inspired by three poems published all in the same year (1936):

The February 1936 issue of La Nouvelle revue francaise brought out two of the three poems that Florent Schmitt set to music in his 1941 Trois trios — the ones by Jean Cocteau and Tristan Derème. 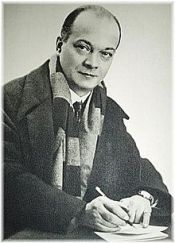 Indeed, as all three writers were particular favorites of the composer, Schmitt would turn to them for literary inspiration on several different occasions. In the case of Trois trios, the poetry gave the composer the opportunity to indulge in his penchant for “irony, fantasy and mischievousness,” as Canadian arts administrator Laurent Patenaude states it.

One of the characteristics of Trois trios that makes it such an appealing composition is the inventive chromaticism of the writing.  Combined with the infectiously attractive blending of the female voices, it makes for a rich and robust sonic brew for sure.

Schmitt scored the music so that it could be sung by a women’s chorus, or alternatively by three solo voices (a soprano, mezzo and contralto). But as was the case with many of his creations, the composer also prepared a version of Trois trios for voices and orchestra in addition to the one with piano.

As it so happened, it was in that form that the first public performance of the music occurred in April 1942, featuring three soloists (Mmes. Blanc-Andrea, Myrtal and Fleuret) rather than a full chorus, along with the Pasdeloup Orchestra.

Writing about that premiere performance in the pages of Les Nouveaux temps, the French arts journalist Robert Bernard noted:

“No musician is less bound than Florent Schmitt by a formula’s constraints, and a whole part of his creative output — a substantial and significant part, actually — is steeped in the most playful liveliness and an ironic verve that stretches ultimately to an utterly paradoxical and truculent fantasy. These pieces … fall into this category.”

Indeed, the three pieces that make up Trois trios couldn’t be more different — a military song followed by a nocturne and then a really bizarre nursery rhyme (trust me on this).

Trois trios was published by Durand et Cie. in 1947, five years after the premiere performance. 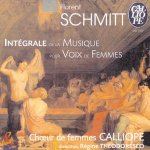 I first came to know Trois trios on a commercial recording of Florent Schmitt’s complete works for female chorus, recorded in 2001 by the Choeur des femmes calliope directed by Régine Théodoresco.

Initially released on the Calliope label, in recent years the recording has been reissued by Timpani, a label which has been particularly attentive to presenting Schmitt’s music to the public. This performance has also been uploaded to YouTube where it’s presented along with the score, so listeners can follow along and “see” as well as “hear” the poetry with the music.

Later on, I discovered that another commercial recording of Trois trios predated the Calliope release by one year — a recording on the ATMA label that features the female voices of Le Jeune Opéra du Québec, directed by Gilbert Patenaude.

Both of these performances are fine interpretations, with the vocalists and pianists navigating Schmitt’s sometimes complex rhythms and harmonies with real aplomb.

An example of the many René Chalupt literary creations set to music. The 1934 composition pictured here is by Albert Roussel, with the score inscribed by the composer.

More recently, a public performance of Trois trios has came to light — one that emanates from Tokyo, Japan. Presented in 2008, it features the Mimosa Chorus directed by Hiroshi Goto along with pianist Rieko Kanehara.  I am equally impressed with the effectiveness of this performance … and you can judge for yourself as well, courtesy of YouTube:

Unfortunately, what none of these performances gives us is Schmitt’s version for chorus with orchestra; we can only imagine how effective that would be — master orchestrator that Schmitt was.

As with the composer’s elusive orchestral version of the 1931 Six choeurs, here’s hoping that an enterprising conductor will be inspired to bring these orchestral arrangements to us in the near future.