Florent Schmitt with soprano Denise Duval at a reception given in Paris for the release of the premiere recording of Psaume XLVII (1953).

A living legend today — well into her nineties — the French soprano Denise Duval is a link to France’s glorious musical past.

History remembers her as the famous muse to Francis Poulenc, but Duval was also an important interpreter of the music of other significant French composers of the early- and mid-twentieth century — among them Claude Debussy, Maurice Ravel, Henri Büsser, Albert Roussel, Germaine Tailleferre, Darius Milhaud, Jacques Ibert … and Florent Schmitt.

Born in 1921, Denise Duval made her debut in Bordeaux in 1942, singing the role of Lola in Petro Mascagni’s Cavalleria rusticana.

She would soon make her mark in Paris, where, beginning with Madame Butterfly, she starred in productions at the Paris Opéra and the Opéra-Comique over a 20-year period that ended with her retirement in the mid-1960s at the age of 44.

The music critic Stephen Mudge has characterized Denise Duval as “the epitome of Parisian elegance” — and indeed, the photos of Mme. Duval during her years on the stage inevitably convey just such an image.

Likewise, her soprano voice was characteristic of the qualities many associate with the quintessential “French” style of singing — that is, a general fragility, precise intonation, and a noticeable lack of vibrato.

It’s not the type of singing one would associate with German opera or Central European lieder, but near-perfect for roles where emotion remains somewhat “in check” — and also for neo-classical or even “ironic” roles.

To say that the French conductor Francis Poulenc had an emotionally intimate if strictly platonic relationship with Denise Duval would not be an overstatement.  Poulenc first met Duval not at the opera house, but at the Folies-Bergère nightclub where she performed when she first arrived in Paris.

“Immediately, I was struck by her bright voice, her beauty, chic, and especially her hearty laughter,” Poulenc would say later.  “Instantly, I knew she would be the perfect interpreter [of my music].”

Francis Poulenc and his “feminine ideal,” the soprano Denise Duval.

It was a close professional and personal bond that would flourish during the last 15 years of Poulenc’s life and involve some of the composer’s most important works.

Apart from the opera stage, Duval also gave recitals of Poulenc’s music, with the composer accompanying her on the piano.

It was with obvious affection that Poulenc referred to his friend and fellow musician as “my beloved doe” and “the nightingale of my tears.”

In later years, Duval would recall that Poulenc seemed more fascinated by her beauty and her acting above all else:  “Poulenc never spoke of my voice.  Instead, he would say, ‘Do you not think she is beautiful?'”

In a sense, Poulenc, who with rare exceptions was not physically intimate with women during his life, may have been infatuated with the “idea” of feminine beauty as personified in Denise Duval. 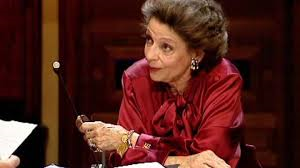 In the five decades since her retirement from the stage, Denise Duval has eschewed an active role in the music world — either in Paris or in Switzerland, where she lives today.

There was one notable exception:  Several years ago, portions of a single master class she gave on La Voix humaine were recorded.  This clip, courtesy of YouTube, provides a rare glimpse into Duval’s life on the stage, and of her relationship with Francis Poulenc.

But we also have recordings, of course.  Throughout the 1950s, Denise Duval was a popular artist for Pathé-Marconi, the French recording arm of EMI.  Not surprisingly, those releases included the various Poulenc opera roles she created.

And there were two other notable recordings made by Denise Duval in 1952:  Ravel’s 1909 comic opera L’Heure espagnole, in which she sings a riotously coquettish Concepción … and the world premiere recording of Florent Schmitt’s 1904 choral masterpiece Psaume XLVII, in which her evocation of the passion and mystery in the ecstatic middle section of the score may have been equaled in later recordings, but has never been bettered.

As the music critic Emile Vuillermoz wrote of Duval’s interpretation of the Psaume:

“We penetrate into the perfumed chamber of the Shulamite, who gives utterance to her soft, dove-like cooings.  A woman’s voice whispers, ‘He hath chosen in his inheritance the beauty of Jacob, whom he hath loved.’  And ecstatic murmurs accompany this recollection of divine goodness in a contemplative reverie through which pass all the perfumes of the East …” 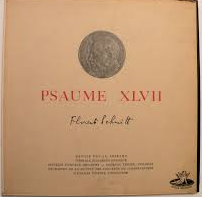 Florent Schmitt was present during the recording session of the Psalm, which also featured an impressive roster of other artists: the organist-composer Maurice Duruflé along with the Elisabeth Brasseur Chorale and the Paris Conservatoire Orchestra conducted by Georges Tzipine.

The polar opposite of Poulenc when it came to red-blooded romantic relationships with women, one can imagine how Schmitt was able to recognize wholly different dimensions in Denise Duval’s interpretation of the important soprano solo part in his Psalm.

Certainly, in the photos taken at a reception given at the time of the recording’s release in Paris, one can sense the keen admiration the older composer had for the soprano, his junior by 50 years. 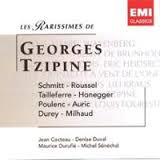 Quite simply, it is a recording that remains interesting and important, more than 60 years after its release.

While it may be a surprise to discover that Denise Duval chose to remove herself completely from the music scene following her retirement from the stage at the relatively young age of 44 (the consequence of a medical ailment), a 2009 interview she gave to Stephen Mudge helps us understand her decision a bit better.

Asked by Mudge if Poulenc hadn’t discovered her, what music she would have sung instead, Duval replied:

“I wouldn’t have sung at all.  I wanted to act, and if [Jean] Cocteau hadn’t died, I would have given up singing and performed his plays.  I always detested singing.  I undertook a singing career — but I always detested it.”

It’s an honesty that may be rare to find in many artists … but it has always been a hallmark of Denise Duval.