French composers of the period really knew how to write vocal music.  Composers like Ravel, Debussy and Florent Schmitt were taught how to write for the human voice.

How can one composer be so gifted at so much?

When one looks at the extensive catalogue of Florent Schmitt’s compositions, vocal music is prominent.  In fact, the large volume of the composer’s works for voice spans nearly a 75-year period.  Via his vocal pieces alone we can actually trace the evolution of Schmitt’s musical style, from its beginnings as 19th century salon-style pieces in the spirit of his first composition teacher, Jules Massenet, through the revolutionary experimentation of the 1920s, and its ultimate return to a more approachable if more spare mature style.

Florent Schmitt, photographed at about the time he composed Trois chants.

Schmitt had quite the knack for selecting texts which lend themselves well to musical treatment, and the Trois chants are no exception.  The verses are quite varied — as are the poets who wrote them.

The first setting in Trois chants is of the poem Elle était venue ... (She had come …) by Charles Vildrac, a French pacifist-socialist poet, playwright and pedagogue who is best-remembered for his theatre works dating from the 1920s.

In his poetry, Vildrac adopted characteristics of verse-librisme, which correspond to human breathing and are based more on speech rhythms than on rhyming words.  His poetry has been characterized as direct, concrete and descriptive.  In his verse, Vildrac often depicts scenes inhabited by uprooted people who are unable to follow through on their dreams and aspirations.

Another French composer, Jacques Ibert, had set this same poetry to music in his Trois chansons de Charles Vildrac.  Composed 20 years earlier than Schmitt’s piece, that music is attractive but fails to truly capture the suffocating atmospherics and sense of impending danger that is inherent in the verse.  With Schmitt, the adventure is a more treacherous one — and we feel very much a part of it.

In the second number in Trois chants, Schmitt turned to the poem La Citerne des milles colonnes (The Cistern of a Thousand Columns) by Leïla de Dampierre.  This Turkish-born author, novelist and poet was also an artist and designer.  Married to a French diplomat, Dampierre experienced a life full of travel — and some danger — living in German-occupied Oslo and in Admiral Horthy’s Budapest as well as spending some months in a German “education camp” following the Nazi occupation of Hungary.

But in this poem, Dampierre “goes home again” and conjures up the forbidding atmosphere of the Basilica Cistern in Istanbul, where “sometimes a black boat brushes against the silence, and your vain beauty emerges from the night, splashing the dead water where a lantern passes by …” 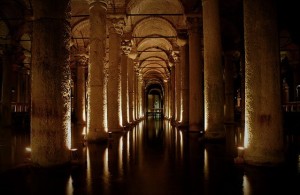 The Yerebatan Sarnici (Basilica Cistern) in Istanbul, Turkey was the inspiration for Leïla de Dampierre’s poem The Cistern of a Thousand Pillars. No doubt, Florent Schmitt himself visited this site during his travels throughout the Ottoman Empire in the early 1900s.

Dating from the 6th century, the cathedral-sized Basilica Cistern was constructed to provide water filtration for the Great Palace of Constantinople.  At over 100,000 sq. ft. in size, it’s the largest of several hundred ancient cisterns that lie beneath the city.

No doubt, Schmitt visited the Basilica Cistern during his extensive travels in the Ottoman Empire in the early 1900s, so it is wholly fitting that he would have been inspired to set Dampierre’s verse.  It contains some of the most memorable “water music” ever created by the composer, while the undulating boat and the vision of the sepulchral lantern’s glow are chilling in their effect.

The third piece in Trois chants is of a wholly different character — and it’s where the ironic and witty side of Schmitt’s persona shines forth.

Charles Sanglier was the nom de plume of journalist and writer Charles Vallet, who was best-known as a union organizer and passionate workers’ rights advocate. As an individual with a clearly radical/anarchist bent, in addition to creating various polemic tracts Vallet’s writings included a book containing “riffs” on Jean de la Fontaine‘s classic fables from the 17th century.

Written over a period of some years, Sanglier collected his stories and accompanying cartoon drawings into a slim volume titled Les Fables du Sanglier, first published in 1935. 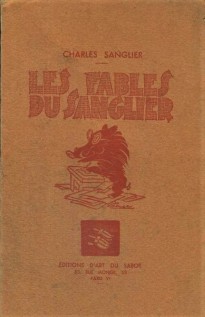 Les Fables du Sanglier, first published in 1935, contains 43 lively stories loosely based on Jean de la Fontaine’s fables from the 17th century. But in Charles Vallet’s hands, each one has its own special twist. No doubt Florent Schmitt appreciated the irony and wit of these vignettes and their often-surprising outcomes.

In Sanglier’s fables, the narrative strays from La Fontaine’s classic story-lines, often ending up in surprising places. In one, for example, an old cat is fooling the mice by feigning blindness — until a dog shows up. Suddenly everyone becomes the hunted, scattering quickly.

In the case of La Tortue et le lièvre (The Tortoise and the Hare), the Sanglier fable Florent Schmitt chose to set to music, an old canine overhears the wager made between the hare and tortoise and ventures to the finish line, anticipating that the hare will cross it first and become a mighty fine dinner.

But when the dog bounds out from the bushes and cracks his teeth on the turtle’s hard shell instead, the hare exclaims, “The tortoise took my place. I won’t complain: Better late than dead!”. Schmitt’s exuberant musical setting tracks the story line-by-line and is full of infectious good humor.

Texts to the three poems set to music by Florent Schmitt in his Trois chants, composed in 1943.

While differing in many ways, the three songs that comprise Trois chants share similarities as well.  Schmitt selected vibrant contemporary writers — two of them decidedly out of the sociopolitical mainstream — and chose verses that lend themselves to highly descriptive musical storytelling.  And in telling those stories, the composer does not disappoint!

Considering that it’s such an interesting score, it’s a wonder that the music isn’t performed regularly.  But like so much of Schmitt’s vast vocal repertoire, the piece is a genuine rarity in the recital hall — and as for commercial recordings, there have been only two ever made.

The first of them was made in the mid-1970s by the Romanian-American soprano Yolanda Marcoulescou with pianist Katja Phillabaum, and was originally released on the Orion label. Marcoulescou imbues the music with all the artistic expressiveness one could hope to hear, but as the recording was made late in the singer’s career, the timbre of the voice is a little heavier than ideal. Interpretively though, Marcoulescou and Phillabaum have the full measure of the music and bring the poetry to life beautifully.

The Orion recording was reissued in the CD era as part of a multi-disk set of the collected recordings of Yolanda Marcoulescou.  Available for a time on the Gasparo label, the CD reissue is long out of print and commands high prices on the used record market.  But fortunately, the performance has also been uploaded to YouTube and can be accessed here. It is well-worth hearing.

It took more than 45 years for a second commercial recording of Trois chants to appear.  It’s part of a first-ever recording 100% devoted to the vocal music of Florent Schmitt.  Released in July 2020 on the Resonus Classics label, the new performance was recorded at the studios of Swiss Radio in Zürich and features soprano Sybille Diethelm and pianist Fabienne Romer. 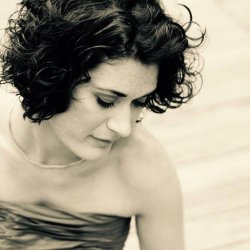 This rendition differs from the Marcoulescou recording – in the first two numbers at least — in that tempos are substantially slower while the music’s edges have been smoothed out.  While not to my own personal taste, it’s certainly a valid alternative approach and provides an interesting contrast for listeners who’d wish to explore Trois chants from more than one interpretive angle.

Eliette Schenneberg (1908-1948) gave the premiere performance of Trois chansons (orchestral version) in Paris in 1943. In addition to working in close collaboration with several of France’s leading composers, Mlle. Schenneberg was also the wife of composer and music critic Gustave Samazeuilh.

If performances and recording activities involving the original voice/piano version of Trois chants have been spotty, it’s been completely nonexistent when it comes to Schmitt’s own arrangement of the piece for voice and orchestra.  That version was prepared contemporaneously with the original and had its premiere in Paris in April 1943, sung by mezzo-soprano Eliette Schenneberg with Gaston Poulet conducting the orchestral forces.

Florent Schmitt would orchestrate many of his vocal compositions, but Trois chants is particularly noteworthy due to the large number of players required — more than in any other work for solo voice that the composer orchestrated.  Thanks to the extra winds and percussion called for in the score, Schmitt weaves an additional layer of color and atmospherics into the already-rich tapestry of sound.

The instrumentation for Florent Schmitt’s Trois chants is lavish, calling for larger musical forces than are typically employed in his orchestrated songs.

Commenting on Trois chants and its orchestration, the American conductor JoAnn Falletta says:

“The variety and freshness in Florent Schmitt’s work always amaze me.  In Trois chants, he seems to set aside traditional romantic topics but a strong sensuality is there — and it’s irresistible.

As in many other Schmitt compositions there are hints of dark undercurrents, but much of the music is cheeky and modern, filled with bright and angular harmonies. And then the times when he uses the brushstrokes of impressionism — when he floats with grace — it is magical.”

It’s quite likely that the orchestrated version of Trois chants hasn’t been heard in performance in more than half a century — and likelier still that the music has never been presented outside France.  Perhaps Maestra Falletta or another of Florent Schmitt’s passionate advocates such as Lionel Bringuier, Fabien Gabel, Sascha Goetzel, Sakari Oramo or Eckart Preu will see fit to bring Trois chants to a new generation of music-lovers. 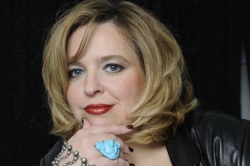