In 2018, an article was published on the Florent Schmitt Website + Blog about the French painter Mathieu Cherkit.  One of the bright stars of France’s younger generation of artists, Cherkit’s work is notable not only for its neo-primitive style that also suggests Fauvist influences, but also because of the inspiration that lies behind many of his creations.

A view of the Parisian suburb of St-Cloud.

That inspiration is Florent Schmitt’s longtime home in St-Cloud.  The Parisian suburb of St-Cloud, once a leafy community containing many large, stately homes, has in recent decades been transformed into a wholly different landscape of apartment buildings and unavoidable traffic congestion.

Mathieu Cherkit, Photographed outside the side entrance to the former home of Florent Schmitt (Photo ©Michel Lunardelli, 2017)

And yet … Florent Schmitt’s former residence remains very much the same as it was during the 35+ years he and his wife lived there.  That’s because the next residents to occupy the Schmitt home were the Cherkit family — in the mid 1950s — and they have remained there ever since.

Mathieu Cherkit is the third generation of his family to reside at the property, and his own son now extends it to a fourth generation.

The Mathieu Cherkit book, published in 2019 and now available worldwide.

The 2018 article, which introduced Cherkit’s artwork along with explaining its connection with Florent Schmitt’s former home, garnered notable attention when it was published.  And today there’s a new chapter of the story to report, in that an attractive coffee-table book of Cherkit’s paintings is now available.

Published in 2019, initially the book was offered by bricks-and-mortar and online booksellers in France and the UK only. But recently the book has been added to Amazon.com’s product offerings, so that now art aficionados and Schmitt devotees in North America have easy access to purchasing copies as well.

Mathieu Cherkit’s painting of the main staircase at the home.

Taken on their own terms Cherkit’s paintings of scenes in and around Schmitt’s home are quite fascinating.  Deceptively “ordinary” in their subject matter, one suspects that they hide their own measure of secrets as well.  As fellow French artist Marc Desgrandschamps has written:

“The young artist reproduces the reality of his familiar places — his daily wonders.  It is a world of plenteousness — plenteous objects and vegetation in interiors and gardens where nothing happens … if attention to detail is the mark of precision, then it suffuses Mathieu Cherkit’s paintings in the abundance of details disseminated within his monumental compositions. 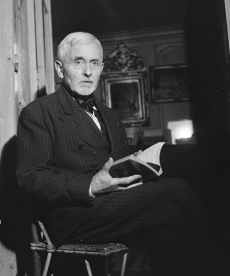 Florent Schmitt, seated at the doorway of the side entrance to his home. (Photo: Lipnitzki / Roger-Viollet, 1953)

These details are clues to a narrative that wants reconstructing — an investigation that wants conducting.  Around nothingness something eventually springs — the traces or beginnings of a story …”

Florent Schmitt penned many of his best-known compositions in his study on the main floor of the mansion, and Cherkit’s paintings give us a glimpse of that environment.  It’s amazing how similar the rooms and walls — and even some of the same fixtures — appear now as then. 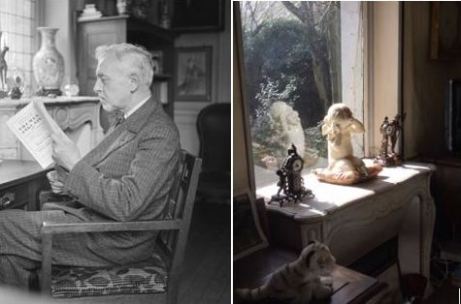 Two views: Florent Schmitt photographed in his study in 1937 … and the same room pictured in 2019. Notice some of the same furnishings. (Photos: Lipnitzki/Roger-Violet; Mathieu Cherkit)

Richly illustrated, the Cherkit book also includes several insightful essays presented in both French and English.  Copies are available at many online booksellers including Amazon, where it can be purchased through Amazon’s country sites in the United States, United Kingdom, France and Germany.

For connoisseurs of contemporary fine art, this volume is self-recommending.  For music-lovers who appreciate the creative genius of Florent Schmitt, the book provides the next best thing to a pilgrimage to the place where the composer conceived so many of his notable musical creations.  It is well-worth exploring.

The artist at work: Mathieu Cherkit on the grounds of Florent Schmitt’s longtime home in St-Cloud.