Published in English and French versions, the book is available for viewing and download free of charge.

Researched and written by French musicologist and author Nicolas Southon, the slender volume (44 pages long) presents profiles of selected orchestral compositions created by 16 Francophone composers during the late-nineteenth to the mid-twentieth centuries.

According to Southon, the goal of the project was to “go beyond” the music of Claude Debussy and Maurice Ravel to explore the orchestral works of a group of composers who occupy an important place in French music, but who aren’t as well-known to the musical public.

“We began this project figuring that most people equate the French musical aesthetic of this period with the compositions of Debussy and Ravel – along with perhaps a few others. But there are so many other great French composers,” Southon observed.

Accordingly, the composers covered in the book include:

Another Nicolas Southon book — this one on American music.

Clearly, some of these names are better known than others. Many music-lovers will be well-familiar with composers like Dukas, Honegger, Messiaen, Milhaud and Roussel.

Composers such as Koechlin, Pierné and Schmitt are less known but not “unknown” … while a few others like Cras, Daniel-Lesur and Ferroud may be completely new names to many.

Further explaining the thinking behind the repertoire that was chosen for inclusion in the book, Southon remarked, “Even among the most famous names, some compositions are rarely played. It is why I chose to include scores by Messiaen and Dutilleux, for example.”

The space devoted to Florent Schmitt is representative of the kind of profiles developed covering the compositions contained in the book.

Southon selected three orchestral scores by Schmitt to feature. Inarguably the most famous of them is La Tragédie de Salomé, Op. 50 (1907/10) which remains the work of Schmitt’s that is most often performed and recorded.

Also profiled are the two suites that make up Schmitt’s Antoine et Cléopâtre, Op. 69, composed in 1920 for André Gide’s adaptation of Shakespeare’s play which featured dancer and dramatic actress Ida Rubinstein in the title role.  In recent years, this music has begun reappearing in concert – being programmed by the Buffalo Philharmonic Orchestra, the Virginia Symphony, the Los Angeles Philharmonic and the BBC Symphony Orchestra … and more recently still by the Orchestre de Paris and the Antwerp Symphony Orchestra.

[There is also a 2015 NAXOS recording of both suites by the Buffalo Philharmonic under the direction of JoAnn Falletta that has garnered critical acclaim.]

The third score by Schmitt featured in the book is the Symphony #2, Op. 137, the composer’s penultimate work, composed in 1957.  It was  premiered by Charles Munch and the ORTF Orchestra at the Strasbourg Festival in 1958 just six weeks before Schmitt’s death.

Speaking in glowing terms about this piece, Southon remarked, “I’m very fond of the Second Symphony. In particular, I find the beginning of the slow second movement amazingly beautiful.”

A French Touch has been published in English and in French editions. Durand-Salabert-Eschig has made it available for viewing and download free of charge here (for the English version) and here (for the French).

According to Southon, the book has also been distributed in hard-copy form to music directors of many of the world’s leading orchestras to help educate and inform them about this important yet relatively neglected repertoire. 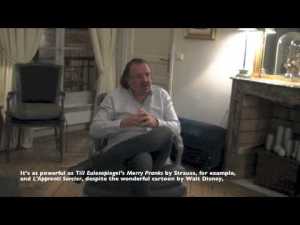 As an adjunct to the publication, Southon also conducted interviews with two eminent French orchestra conductors in which a number of composers and their scores were discussed.

I heartily recommend that all lovers of French music – and of any classical music composed between 1890 and the 1950s – explore this book. It is chockfull of information, beautifully produced, well-organized and easy to read … and it also includes a very helpful index of composers and their works featured in the book.

Speaking personally, I learned new information about several of these composers and their compositions that I did not know before – and I imagine you’ll do the same.

Update (3/10/18):  In March 2018, the first commercial recording in 30 years of Florent Schmitt’s Symphony No. 2 was released by Chandos Records, in a blockbuster performance featuring the BBC Symphony Orchestra conducted by its music director, Sakari Oramo.  Speaking about this recording at the time of its release, Mr. Southon was effusive in his praise:

The new Florent Schmitt release on the Chandos label (March 2018).

“This recording will surely count as a landmark in the recognition of Schmitt, in part because it’s performed by an important and iconic foreign orchestra.

It’s interesting to see that French music-lovers sometimes need the validation of foreign performances to become convinced of the worthiness of their own national music.  It can be claimed that Berlioz was revealed to the French by British and American performers.

As for the 1957 Symphony No. 2, this was the first time Schmitt attempted to create a “classic” symphony — one with three movements shaped in the traditional way, and without any featured instrument or extra-musical argument or title.

Such a gesture to a traditional genre reminds us that Gabriel Fauré composed his only string quartet as his very last work.  It’s often stated that many artists, at the end of their lives, find or return to a sense of classicism.  Both Fauré’s and Schmitt’s final creations are confirmation of that claim.”