Here in the year 2016, it is well over a half-century since French composer Florent Schmitt passed away at the age of nearly 90 years. Consequently, the number of musicians who have first-hand memories of interacting with the master has dwindled to a precious few.

But we are fortunate to have French composer and teacher Alain Margoni as one who knew Florent Schmitt well. Now nearly 82 years old, Maestro Margoni is a link to a glorious past era — one which musicologist Jerry Rife refers to as “surely the most vibrant and exciting period in the history of French music.”

Margoni was introduced to Florent Schmitt in 1951 when the young musician was just 18 years old. At the time, Schmitt was already in his 80s.  But fate was generous to allow the two men the opportunity to work together during the 1950s until the older composer’s death in 1958.

The Villa Medici, where Prix de Rome prize-winners stayed during their time in Italy.

During this time, Alain Margoni studied composition at the Paris Conservatoire, where he eventually won first prize for composition in the 1959 Prix de Rome competition with his cantata Dans les Jardins d’Armide.

The Prix de Rome first prize for competition happened to be the one that Florent Schmitt had also won 60 years earlier, in 1900. 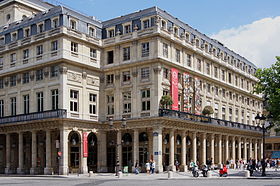 The Comédie-Française in Paris, where Alain Margoni was director during the 1960s and 1970s.

Following his studies at the Paris Conservatoire and his sojourn in Rome, Maestro Margoni went on to have a successful career in several facets of the music field.

In addition to composing, he served as music director of the Comédie-Française from 1966 to 1974, following which he returned to the Conservatoire — this time as a professor of music analysis — where he would teach for two decades.  Maestro Margoni is also the author of numerous books and articles on French music, including an important volume on Charles Gounod.

It was also at the Paris Conservatoire that a young Fabien Gabel, music director of the Orchestre Symphonique de Québec today, took classes under Alain Margoni. Maestro Gabel would establish a professional and personal friendship with the older master that has continued up to the present day.

In interviewing Fabien Gabel for an article recently published on the Florent Schmitt Website + Blog pertaining to Maestro Gabel’s preparation of Schmitt’s 1915 composition Rêves for performance, the conductor recalled that Maestro Margoni had always expressed abundant enthusiasm for the music of Florent Schmitt, whom he often called a “master composer.”

It turns out that even though Schmitt wasn’t an actual instructor of Alain Margoni (whose “official” teachers at the Conservatoire included Tony Aubin and Olivier Messiaen), he was certainly an important influence in the budding composer’s life.

With this information as backdrop, Fabien Gabel urged me to interview Maestro Margoni about his experiences in working with Florent Schmitt. Special thanks are due to Maestro Gabel for helping to arrange for Alain Margoni’s participation, and for facilitating the interview process itself.  [Maestro Margoni’s observations, presented below, have been translated from French into English.]

PLN: When did you first meet Florent Schmitt and how were you introduced to one another?

AM: I met Florent Schmitt through mutual friends in music. At the time I was just 18 years old and Schmitt was over the age of 80!

PLN: Schmitt is known for having encouraged younger composers during his life. In what ways did he encourage you in your development of a composer?

AM: Schmitt encouraged me in my composition studies at the Paris Conservatoire. He guided me throughout the 1950s but died in 1958 — one year before I won the Prix de Rome first prize for composition.  I knew him quite well during this period. and I still have great memories of my interactions with him.

Technically, Schmitt didn’t teach me and didn’t help me prepare for the Prix de Rome competition.  It wasn’t in his nature to be an instructor, even though he had once been director of the music conservatory in Lyon.  But in more general terms he did encourage my development as a composer, and that was very valuable to me.

PLN: How would you describe Florent Schmitt in terms of his personal qualities?

AM: Florent Schmitt was an individual who always spoke his mind quite frankly. To some, he might have seemed abrupt in his comments because of this frankness.

He wasn’t a gregarious individual, but he also was a lot of fun! You can tell this from some of the clever titles of his compositions [e.g., Clavecin optempérent, Hasards, Habeyssée, Quatuor pour presque tous les temps, Suite en rocaille].  The names are reminiscent of Erik Satie in some ways, but the pieces are also rich and powerful creations.

In addition, Florent Schmitt was an important music critic in Paris over several decades [La France and Le Temps, until 1939].  While little known today, his concert reviews and press dispatches are informative and exciting — very descriptively written in a rich and pure French writing style.

PLN: For some people, Florent Schmitt is something of a “caricature” based on his alleged pro-German sympathies during the 1930s and 1940s. Do you feel that this perception is justified?

AM: Florent Schmitt has been falsely accused by some people of having Nazi sympathies. His alleged “collaboration” with the enemy became a way to attempt to ransack the composer’s reputation and his career accomplishments following his death.

Indeed, one could say that Schmitt was secretly “excommunicated” — not through direct evidence, but by cowardly and clandestine whispers and innuendo. I consider those actions to be absolutely unjustifiable — and indeed immoral.

PLN: As a composer, you have a special vantage point for judging the musical worth of fellow composers. In your opinion, what is the importance of Florent Schmitt among the composers of his time?  How significant are his contributions to French music?

Igor Stravinsky (l.), photographed with Florent Schmitt in about 1910.

AM: Florent Schmitt’s contributions to French music are huge — but up until recently, quite unknown to many people. But upon closer investigation, one can easily see how important he is by looking at the music of other composers and how he is reflected in their own output.

On the one hand, Schmitt’s musical aesthetic is a cross between late-Romanticism, the modernism of Debussy, and also Stravinsky (where one cannot forget the friendship and mutual admiration between the two men).

Closer to our day, we can also see shadows of Schmitt in the music of Milhaud, Honegger and Dutilleux.

Regarding Schmitt’s aesthetic, I feel that one can apply the broader judgment of a French historian of the last century who famously claimed, “The French are not revolutionaries; they are outraged conservatives.” It is an apt analogy. 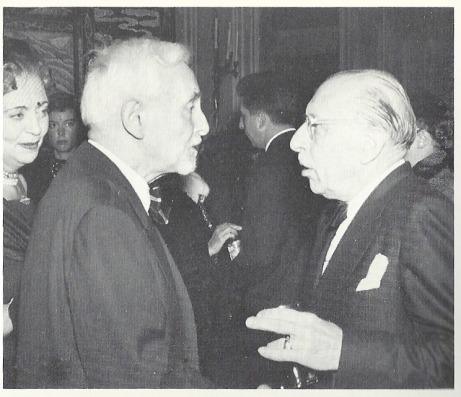 Composer Florent Schmitt (age 87) (l.) with Igor Stravinsky (age 75) and Vera de Bosset Sudeikin Stravinsky at a social gathering at the American Embassy in Paris (1957). Fellow composer Henri Dutilleux is between both men (back to camera).

PLN: Do you have any particular favorite compositions of Florent Schmitt? Which ones?

AM: There are so many towering compositions. Psaume XLVII and La Tragédie de Salomé, of course.  But also the Symphonie concertante for piano and orchestra, Cippus Feralis [Schmitt’s memorial composition to his teacher and mentor, Gabriel Fauré], and his last great work, the Symphony #2 …

In a time when personal connections to the grand era of early 20th century classical music are nearly impossible to encounter, it is indeed fortunate to be able to hear the recollections of a musician such as Alain Margoni — a man who himself was fortunate to interact directly with one of the great composers from that epoch.

What an opportunity for a young composer then — and for us now — to be witnesses to that history.

One thought on “A link with history: French composer, teacher and writer Alain Margoni, 81, talks about working with Florent Schmitt in Paris during the 1950s.”