Even though he is justly famous for his highly colorful and opulent orchestrations, Florent Schmitt’s own instrument was the piano mainly (although he also played the organ and flute). And during his early years as a composer, much of what he created was a vast quantity of music for piano, as well as for voice with piano.

But roughly contemporaneous with his tenure at the Villa Medici in Rome (1900-04), Schmitt began to explore writing for a greater variety of solo instruments, groups of instruments, and full symphony orchestra.

In time, his output expanded even more with the publication of compositions featuring wind and brass instruments as well as violin and cello.

It is universally acknowledged that the most significant piece Schmitt composed for violin was his Sonate libre (1918-19), an expansive work that exceeds 30 minutes in duration.  Overshadowed by this towering sonata is a suite in three movements featuring the violin that Schmitt composed in 1947: Habeyssée, Op. 110.

This later-career work is more concise in its musical utterance when compared to the Sonate libre; taken together, the suite’s three movements clock in between 11 and 12 minutes in length, making it about one-third the length of the Sonate libre.

And what about the curious title of the piece — “Habeyssée”?

At first blush, it certainly looks and seems exotic — to such a degree that Schmitt’s biographer Yves Hucher speculated that the music was inspired by an Eastern legend.

However, I have found no definitive proof of this — nor of the existence of any specific programme or storyline for the music.

It’s when one looks closer that another explanation emerges. Habeyssée is actually a clever way of presenting the first three letters of the alphabet — ABC.

When we consider that the suite is in three movements marked simply “A”, “B” and “C”, along with Schmitt’s penchant for double meanings and employing puns in the titles of his compositions (there are numerous examples), this “ABC” seems to be a more probable explanation of the title than any elusive “Islamic lore.”

Besides, these are sounds that engage the listener as absolute music, without the need to rely on any special “narrative.”  Indeed, its three contrasting movements provide rich musical material, as follows:

A.  Assez animé — in the form of a scherzo, the first movement abounds with counterpoint melodies and syncopated rhythmic patterns.

B.  Une peu attardé — dreamy and pensive, this movement alternates passages of quiet beauty with waves of contrasting dynamics for a near-mesmerizing experience. To my ears, one of the main musical motifs appears to be a direct quotation from Schmitt’s choral work Fête de la lumière, composed a decade earlier for the Paris Exposition of 1937.

C.  Animé — the light, cheerful mood of this movement fairly crackles with playfulness, and it contains a good deal of Schmitt’s trademark rhythmic complexity and rapidly changing time signatures — often as many as three or four in a single bar of the score. There’s also a lyrical middle section … and then, with a final downward rush of notes, the movement is over in a flash.

Just as in many of Florent Schmitt’s creations, the composer prepared two versions of Habeyssée — one for violin and piano and another for violin and orchestra.  I do not have information on when the violin/piano version was premiered, but we do have records that the orchestral version was first performed on March 12, 1948 by the eminent French violinist Henri Merckel, with the Lamoureux Concerts Orchestra conducted by Eugène Bigot.

Unfortunately, Habeyssée has not fared well in recordings.  To date, each version of the piece been commercially recorded just once.  But both remain available to us courtesy of NAXOS — one of several recording labels that have been particularly keen on providing exposure to Schmitt’s lesser-known compositions.

The violin/piano version of Habeyssée was recorded in February 2014 by violinist Beata Halska-Le Monnier and pianist Claudio Chaiquin, and was released by NAXOS on a recording featuring five violin/piano works by Schmitt that span more than a half-century of composition (1895 to 1947).

The Halska/Chaiquin interpretation is technically flawless. Not only that, the players bring out Schmitt’s rhythmic contrasts highly effectively, while also providing dreamy languorous melodic lines in the second movement of the piece in particular.  Adding to the recording’s attractions, the audio quality is satisfyingly full-bodied, giving listeners a front-row audio experience without sounding “in your face.”

The Halska/Chaiquin recording is available to hear on YouTube, thanks to Philippe Louis’ very fine music channel. In addition, I’ve had the pleasure of interviewing the two artists about how they investigated and prepared the repertoire for their recording, and their remarks can be found here.

The only commercial recording of the orchestral version of Habeyssée dates back several decades before, having been recorded in 1988 by violinist Hannele Segerstam along with the Rheinland-Pfalz Philharmonic Orchestra conducted by Leif Segerstam. 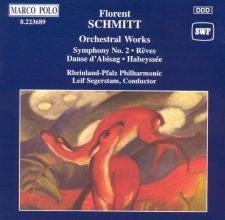 Released by NAXOS’ Marco Polo imprint as part of a collection of four orchestral rarities by Schmitt, the recording has been in the catalogue continuously over the ensuing 30 years.

As expected, Schmitt’s orchestration of Habeyssée is highly colorful and adds further degrees of dimension and nuance to the piece.

To hear a direct comparison with the piano version above, you can listen to the orchestral version on YouTube here.

In my view, the quality of the Marco Polo recording isn’t quite up to the standard of the Halska/Chaiquin release, with the solo violin sounding rather thin in places and the sound of the orchestra coming across as a little tubby. Still, it’s gratifying to have both versions of Habeyssée available to us.

And in the future, we can hope for more artists to turn their attentions to this fine violin suite.